Why Infertile Women Sometimes Get Mistaken for Drunk Psychopaths 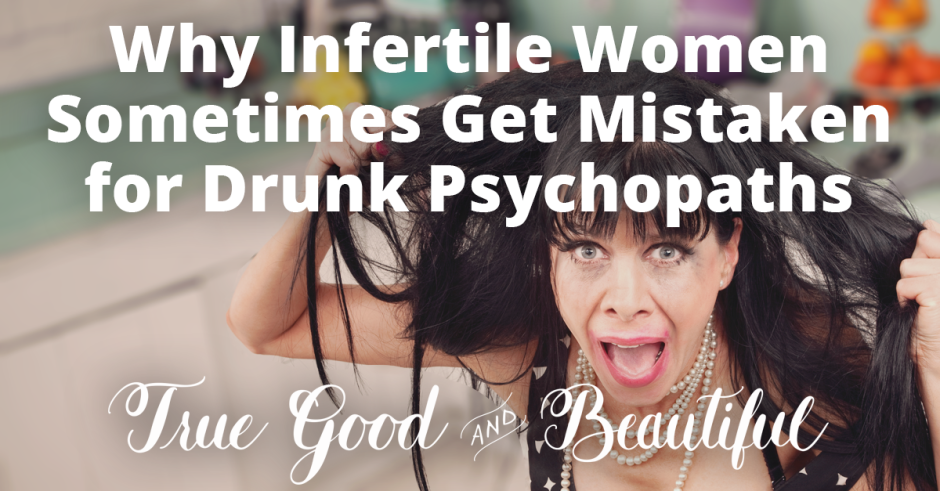 Each day I’ve been fighting to spend time alone with God in prayer.

Part of this time is spent reading the daily Mass readings and last week happened to be about a fellow woman battling infertility named Hannah.

I’ve read the story approximately one billion times before but some aspects of the story hit me in a new way…specifically how her grief was so severe that she got mistaken for being drunk. That’s serious yo. I’ve never seen someone praying and mistaken them as a drunk person and I am betting neither have you.

Let’s take a peak briefly at her story:

He had two wives; the name of the one was Hannah, and the name of the other Penin’nah. And Penin’nah had children, but Hannah had no children. Now this man used to go up year by year from his city to worship and to sacrifice to the LORD of hosts at Shiloh, where the two sons of Eli, Hophni and Phin’ehas, were priests of the LORD. On the day when Elka’nah sacrificed, he would give portions to Penin’nah his wife and to all her sons and daughters; and, although he loved Hannah, he would give Hannah only one portion, because the LORD had closed her womb. And her rival used to provoke her sorely, to irritate her, because the LORD had closed her womb. So it went on year by year; as often as she went up to the house of the LORD, she used to provoke her. Therefore Hannah wept and would not eat. And Elka’nah, her husband, said to her, “Hannah, why do you weep? And why do you not eat? And why is your heart sad? Am I not more to you than ten sons?” After they had eaten and drunk in Shiloh, Hannah rose. Now Eli the priest was sitting on the seat beside the doorpost of the temple of the LORD. She was deeply distressed and prayed to the LORD, and wept bitterly. And she vowed a vow and said, “O LORD of hosts, if thou wilt indeed look on the affliction of thy maidservant, and remember me, and not forget thy maidservant, but wilt give to thy maidservant a son, then I will give him to the LORD all the days of his life, and no razor shall touch his head.” As she continued praying before the LORD, Eli observed her mouth. Hannah was speaking in her heart; only her lips moved, and her voice was not heard; therefore Eli took her to be a drunken woman. And Eli said to her, “How long will you be drunken? Put away your wine from you.” But Hannah answered, “No, my lord, I am a woman sorely troubled; I have drunk neither wine nor strong drink, but I have been pouring out my soul before the LORD. Do not regard your maidservant as a base woman, for all along I have been speaking out of my great anxiety and vexation.” 1 Samuel 1:1-16

First off I want to say that I’ve had many hysterical ugly cries throughout our infertility journey that, if witnessed, would have probably had me institutionalized…so I get it, Hannah.

What I want to look at specifically in this post is how a woman battling infertility can get to that point. I think most would understand that it’s a sad thing to not be able to conceive and bear children…but being distressed to the point of not eating, looking drunk, and being borderline psychotic?

In reading Hannah’s story, I just want to go give her a big hug because she had an rival who made fun of her for being infertile. That would be so very hard. Penin’nah actively rubbed her blessings in Hannah’s face year after year.

I cannot claim that anyone has directly made fun of me or provoked me (I would have throat punched them) about infertility but I think social media feels like a modern day version of this taunting. It’s the place where people offer up snapshots of their lives to invite others to share in the moment. When battling infertility, Facebook and Insta feel like bragging sites. It’s where women, often unknowingly, post about their pregnancies and children in such a way that leaves anyone experiencing infertility feeling mocked and irritated.

This wears a woman down over time and begins to create an extremely fragile emotional state. I had to leave social media altogether for a season just so I could have days I didn’t cry. Seeing dozens and dozens of others’ blessings day after day left me feeling like the biggest loser on the face of the earth. And when one is feeling completely and utterly forgotten by God, eating is not a high priority either. Sinking into a despair hole and trying to Netflix binge your way through life is more likely.

Then her husband comes along and tries to comfort her but only makes it worse. Bless his heart. He essentiaIlly asks if he is not enough to make her happy…which as anyone who’s battled infertility knows is not the point. You can be so happy with your husband but at the same time terribly sad about the fact you cannot have children together. This seems to be her breaking point. Even though her husband is trying to be there to comfort her, she is still feeling alone in her struggle.

This drives her to go to the Lord where she reaches rock bottom…a place I’ve been many a time before. It’s a place where you are praying so hard that it feels like even your toe nails are praying. It’s a prayer that only extreme suffering can bring about. It leaves you wiped out and in an exhausted heap on the floor before God with nothing left. Drunk is probably a conservative word to describe the hot mess she looked like.

If someone approached me in that state and tried to correct me about being drunk? I don’t even want to know what I would’ve been capable of…but Hannah handles it graciously. She simply tells him she’s been praying out of great anxiety and vexation.

Again, a nice way to phrase it.

One definition of drunk is, “being overcome or dominated by a strong feeling or emotion.” I completely understand why Hannah was mistaken for being intoxicated. She’d been worn down, prayed out, made fun of, lonely, and desperate. That’s enough to drive any sane person completely mad.

So Hannah, thank you for setting such an honest and raw example for the rest of us carrying this cross. I know I am not alone in how I feel so often. I will keep throwing myself before the Lord in prayer, even if I resemble a drunk psycho, and allow him to do with those prayers what he wants to.

Hannah and all you holy women who’ve done this before, please pray for us in this battle!

How We Fumbled Through Our First Week In Business

What We’ve Learned After Almost Five Years of Infertility

One Simple Thing to Dramatically Reduce Your Anxiety