The Summer Our Lives Turned Upside Down: Part 1 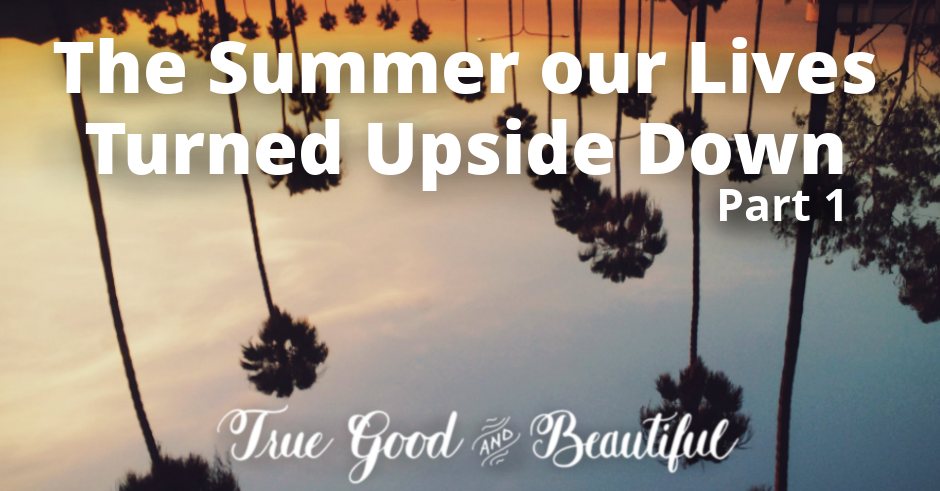 When we entered into Summer this past May, I wouldn’t have in a million year been able to guess how differently our lives would be by Summer’s end.

My head is still spinning from the shock wave of change.

If you guessed that I don’t do well with change, you’re right on.

Me and change repel one another. I am one of those cool people who could happily eat the same food for years, wear the same two outfits for months on end, and live each and every day strategically pre-planned to the minute. I am a creature of habit who generally opposes new things until I warm up to them.

So before we get into the details of what the hay went down during The Summer of 2016, let’s all just celebrate that I am still alive and halfway sane, because it was touch and go. Just imagine a rabid caged animal, and that will give you a mental image of where I was. On my good days. It wasn’t pretty.

Alright, so what happened the last few months?

It all started in May…

Jonathan and I were fresh off our first business launch and really excited about serving our audience and creating relevant content for their needs. We’d been waking at the crack of dawn and then burning the midnight oil to prepare for The Infertility Survival Guide. Our launch went great and we were on track to have our guide completed by summer’s end. [insert God laughing hysterically]

We were oh so close to having things done when I got a phone call from The Pope Paul VI Institute.

It looked like surgery was my best shot at conceiving and carrying a pregnancy, as I had a really bad uterine septum. Like a, maybe-probably-would-miscarry-if-I-ever-conceive, septum. I would need two procedures and they had June 9th and 20th open for me. All of a sudden, business plans came to a screeching halt and I channeled my energy in a new direction.

In the midst of this (since I have a compulsion to be busier than what is healthy) I was also helping launch a new initiative within FOCUS, the first-ever Estes Park Summer Project. My own personal conversion centered heavily of my own experience on a project like this, staffed by The Navigators in Jacksonville, FL during the summer of 2004. It was easily one of the best summers of my life and it instilled in me passion for prayer, scripture, growth, evangelization, and discipleship.

It’s always been a fantasy of mine to introduce these programs to FOCUS and the time was right this summer – since there were other staff willing and ready to get it launched.. I could not wait to see this dream become true because I know how much fruit it will bear in student and staff lives in the years to come.

Around this time, we started to pray an Our Lady Undoer of Knots novena and that’s when weird things began to happen. This isn’t my first rodeo, so I knew that weird + God = stuff  is about to hit the fan (in an ultimately good way that may temporarily feel like death).

In our ninth year on staff, Jonathan and I hoped on staying in FOCUS forever. We wanted to keep making disciples on college campuses until the day we died. While we were praying this novena, it was no longer clear if that was still God’s will for our life…and HIS WILL is more important than what we want to do. We didn’t understand what was happening and where it was coming from. We kept praying because Momma Mary loves to take her spiritual children by the hand and lead them to Jesus’ will in their lives.

Around this time, while we’re still praying the novena, Jonathan got an out-of-the-blue phone call from the Executive Director of KVSS Spirit Catholic Radio in Omaha, NE. He wanted to throw around some ideas about a new project to Jonathan and get his feedback, since Jonathan was referred to him as a highly creative dude. Jonathan had a lot of fun consulting with him on this cutting-edge new idea he had for changing Millenial engagement with Catholic media. Whenever Jonathan left a meeting with them, he was on cloud 9 and kept talking about how cool this new role was going to be, and how it sounded like something he might like to do.

My first surgery was almost 10 hours long. It went really well and gortex was placed to prevent adhesion formation (previously a huge issue for me.) Ten days later (and many many many episodes of Gilmore Girls later) I had a second surgery to remove the gortex. Very few adhesions were found in the second surgery so that left my Doc feeling pretty good about my ovaries staying free from scar tissue. Things looked as health as could be, anatomically speaking. The plan moving forward is to treat my hormones, as those are truly at the root of why I don’t ovulate…ever. (Lord can’t you just shoot a frickin laser beam at my ovaries and get them to rupture? Pretty please!)

It seemed too coincidental that this new job happened to be one Jonathan would love and be perfect for. Oh and it was in Omaha where I grew up and my family is located (as well as the Pope Paul VI Institute). Feeling a bit too-good-to-be-true am I right? However, there was no offer extended to Jonathan to be the guy for it, so once I healed up enough, we packed up and headed home to Colorado just in time for the Fourth of July not knowing where God was taking our family.

What We’ve Been Working On