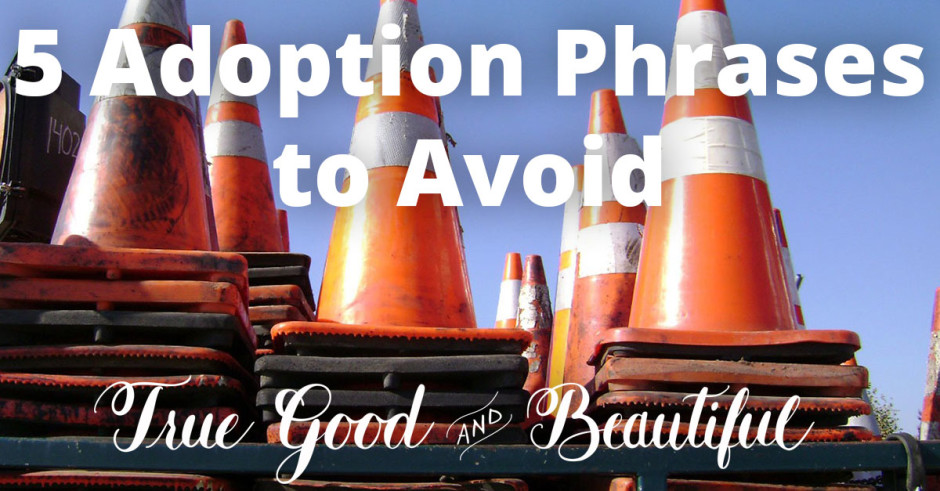 A while back I posted the Adoptive Family Public Service Announcement that I found rather hilarious.

But alas, I have continued to run into insensitive comments from well-meaning individuals about Josephine and the fact that she was adopted.

Here I wish to share with you the top 5 most common offenders I hear and what positive adoption language we all can use instead.

Oh and some gifs that describe what’s going on in my judge-y mind when I hear comments like this.

Honestly, if they didn’t want her she would be dead. Abortion is the typical route in an unwanted pregnancy, not adoption.

Adoption isn’t a route chosen because the birth family didn’t “want” the baby. They most likely DID want the baby and that is why they chose to carry them and to make an adoption plan. They wanted to give them a chance in life.

Even in the rarest situations, where maybe the birth family truly didn’t want the baby in the way you’re implying, don’t ask me this when my daughter is around. She doesn’t need you planting doubts like this in her mind.

2. I could never give my baby up for adoption!

Time to go thank the Lord for the blessed circumstances he’s given you that you’ve never had to consider making an adoption plan.

Sarcasm aside, people don’t make adoption plans willy-nilly because they felt like it. It’s because their life situation wouldn’t be ideal for parenting a child at that point in time.

You likely aren’t anywhere close to facing those same difficult circumstances which is why you can’t fathom pursuing adoption. If you are facing those difficulties? You can understand why adoption is a great option for individuals and couples to choose if they desire.

And the term “give my baby up” sounds heartless and not thought out. The positive term is “making an adoption plan” because it implies intentionality and thought that was behind the choice.

3. Did you adopt her because you couldn’t have your own?

This one was recently asked of me in a front of a group of 20+ women and I handled it pretty dang well.

But really? Why is it anyone else’s business to understand the nitty gritty details of why we pursued adoption? It’s pretty obvious to you all here on the blog since we’ve shared our story publicly but I am still dumb-founded at why people ask this question.

We don’t know if we will ever have biological children. So I really can’t answer the above question well. I usually say, “We were open to life for about 3 years before her adoption and God chose not to bless us with any biological children for the time being but who knows what the future holds.”

And no matter if we have biological kiddos or not, Josie is very much “our own” child. Genetically, no. But in every other way that actually matters.

4. Do you keep in touch with her real parents?

I haven’t seen a real mom sneak in the window at night for the 3 am feedings to nurse her. Or a real dad doing the cloth diaper laundry.

I have only seen us. Her real parents.

You mean her birth parents? Yes, we keep in touch! 🙂

Josephine was adopted. It was an event that occurred early on in her life, and while it will always be part of her story, it’s not fundamentally who she is at her core.

Her identity is not adoption.

I know the difference in language is subtle but the implications are massive for her to have a healthy identity.

That’s all I’ve got for now but stay tuned for more adoption language blog posts, I am sure they are coming! 🙂

Lastly, for anyone who has accidentally said one of the above offenders to me…please know that I generally give a lot of grace to others and assume that you just don’t know what you are saying when you say it. Although I don’t harbor ill will towards you for long, I do believe providing you with a charitable education on language is beneficial to all parties involved. I hope you found this post helpful for your future adoptive family interactions!