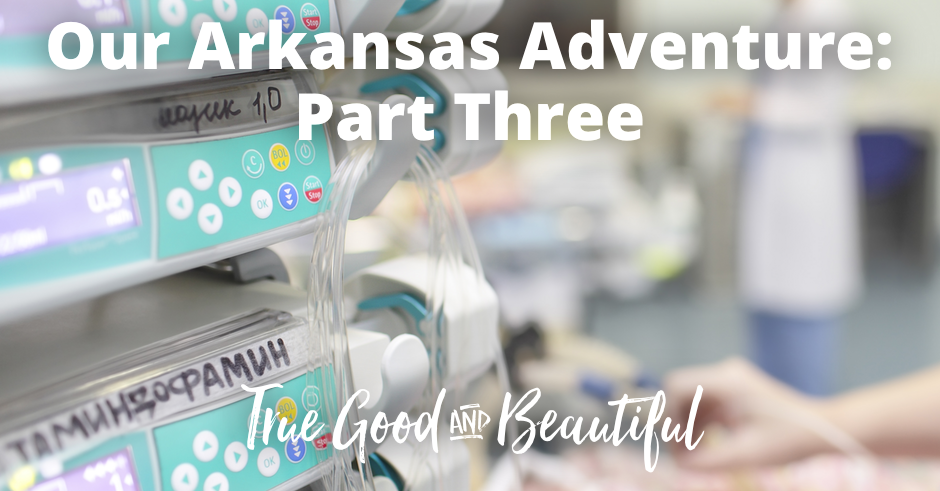 We’re picking back up on our time in Arkansas for Charlotte’s birth. In case you’ve missed parts one and two, catch up! Many apologies for leaving y’all hanging for the last couple of weeks. We’ve had some major behind the scenes work to do with our financial beta class and it’s kept us juuuuuuuust a little busy. That and a couple little people who like to have our attention from time to time. 😉

Alright so let’s jump back to December.

After that first full day in the NICU, it’s hard to put into words everything that happened over the next week and a half. The first several days were obviously the scariest and emotional for us, our families, friends, and Charlotte’s birth family. To say there were ups and downs is quite the understatement.

Not only were we completely uncertain as to Charlotte’s prognosis, we were also living in a city where we virtually knew nobody, it was almost Christmas, and Jonathan didn’t take any time off work due to some big projects with hard deadlines. All those factors combined left us suspended in this hazy, weird, and stress-filled vortex.

Jonathan and I didn’t want JoJo to ever wake up without a parent’s face to see first thing yet we weren’t willing to leave Charlotte alone in the NICU so we began to tag team living at the hospital.

I stopped taking care of myself the day Charlotte got sick. After it was obvious that I wasn’t eating (didn’t even know I wasn’t) Jonathan and the family we were staying with brought me groceries and friends started to send gift cards. Even with that, I still lost close to 10 pounds that first week because all I can eat (thanks autoimmune disease) is meat, fruit, and veggies and you need to eat a lot of those to maintain weight and I was eating like a bird.

Around this time there were also TONS of ups and downs with Charlie. Her blood gasses would look great so they’d wean her oxygen a little bit. Then they’d hit a wall and her gasses were poor so they’d bump her back up… sometimes all the way to 100% oxygen (aka starting over from scratch) and we’d have to begin the weaning process again. It was a two-steps-forward and one-step-back situation for sure.

Almost daily they’d have to add some new medication until Charlotte had like 10 tubes sticking out of her little body for all sorts of purposes. It was so hard to see her constantly sedated but I knew she needed the best that modern medicine could offer and that’s exactly what she was getting. 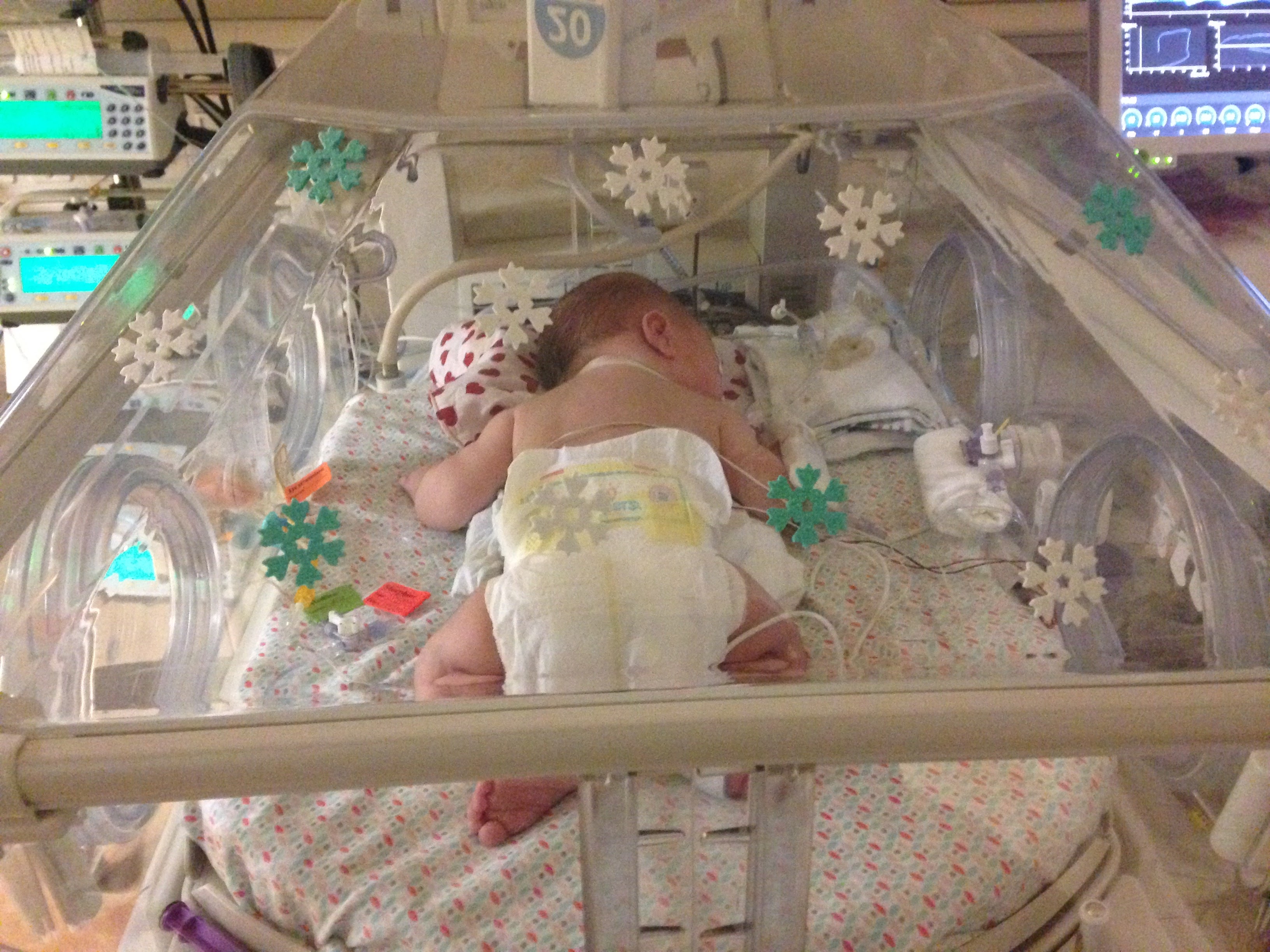 The days ran together and it’s remarkable that even now I can barely remember a full day.

Jonathan had to keep working so he would sit at Charlotte’s bedside working all hours of the day and night until we swapped out and it was his turn to be with Josie. When I was at the hospital, I talked to Charlie and loved on and prayed over her as best I could, but she was sedated and we were told to minimize stimulation altogether. It left me with a lot of time on my hands. I could have been working on big projects for our upcoming business venture but mentally all I had the capacity for was texting, decorating her room for Christmas, Facebooking, scrolling Amazon and watching Fuller House.

In the midst of this we finalized Charlotte’s adoption in court on December 20th, 2016. While we were certainly over the moon to call her our daughter officially, it was still a somber occasion for many reasons. Charlotte wasn’t with us as JoJo had been for her finalization. We hadn’t even held her at that point, seen her face without tubes, or seen her awake. A very surreal experience indeed. 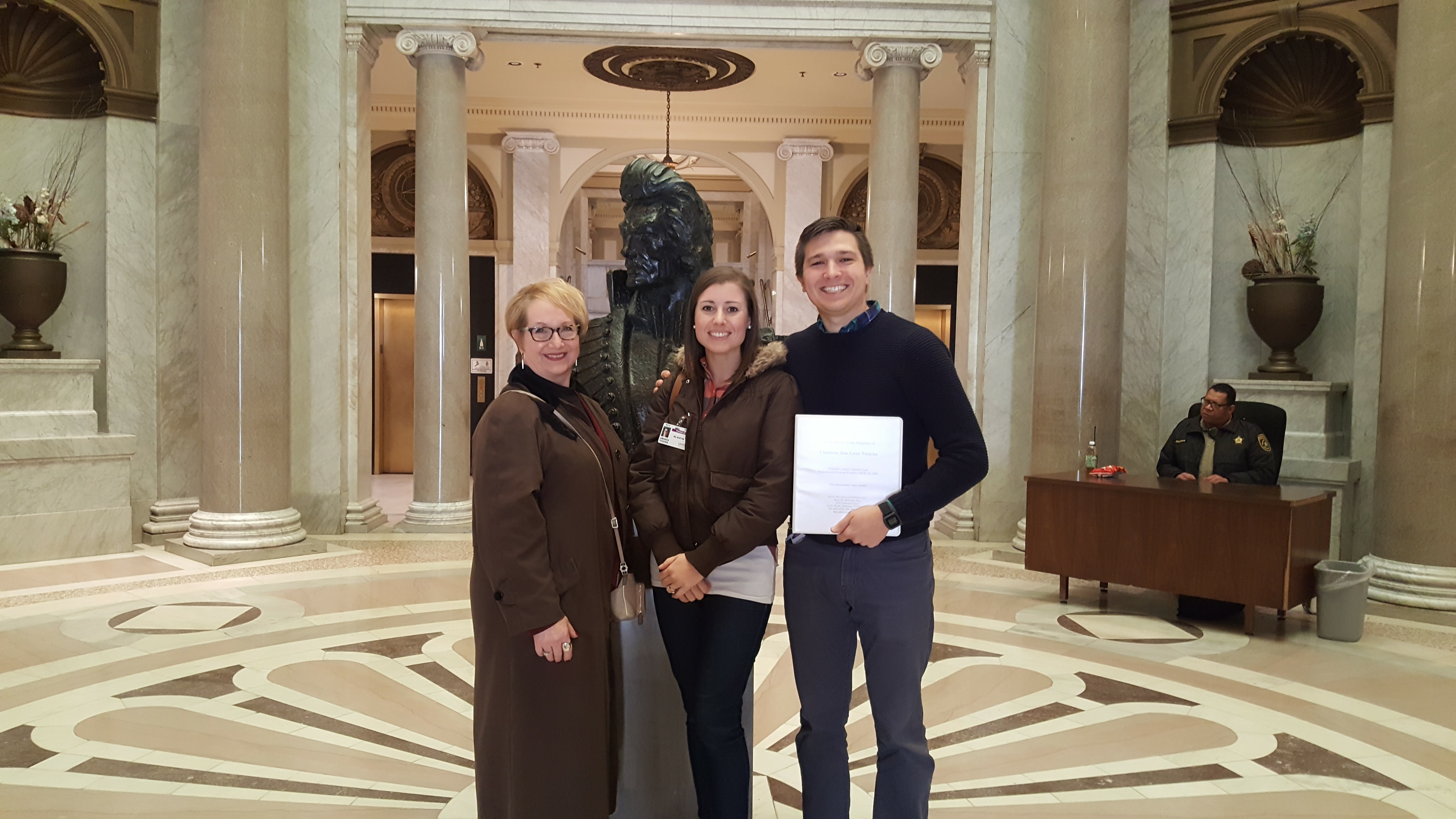 Adoption (at least for us as parents) is one of those double edged swords – incredible joy for the beautiful soul joining our family but sadness for Charlotte not being able to be raised by her birth family and sadness for her birth family because we could see the unspeakable pain this decision brought them. Sure we could just do what some adoptive families have done and completely blow off and not care about our children’s birth families… but that’s not us. We care about them like family….because they are. We aren’t replacing them. We don’t desire to cut them out. They aren’t problems to be swept under rugs. When they hurt – we hurt. And joyful occasions such as a finalization can get mixed with sadness for them and our daughter’s loss and that’s OK.

A little over a week after birth, Charlie successfully weaned her oxygen down to room air (21%) and completely weaned off Nitric Oxide. Woot!!! So it was time to take her off the ventilator. They also took her umbilical line out per protocol to decrease chance of infection but we weren’t too concerned about that since she wasn’t going to need her line for sedation anymore once the ventilator was out and she was breathing on her own.

I’d been at the house with Josie the morning they wanted to take her off the vent and when I heard it was happening that morning, I sprinted to get ready and head into the hospital. I remember seeing Charlie’s doctor in the hallway and she said, “My Christmas gift for you is to hold your baby girl!” I was excited, emotional, nervous, and stressed.

I ran to Charlie’s room and the vent was gone! 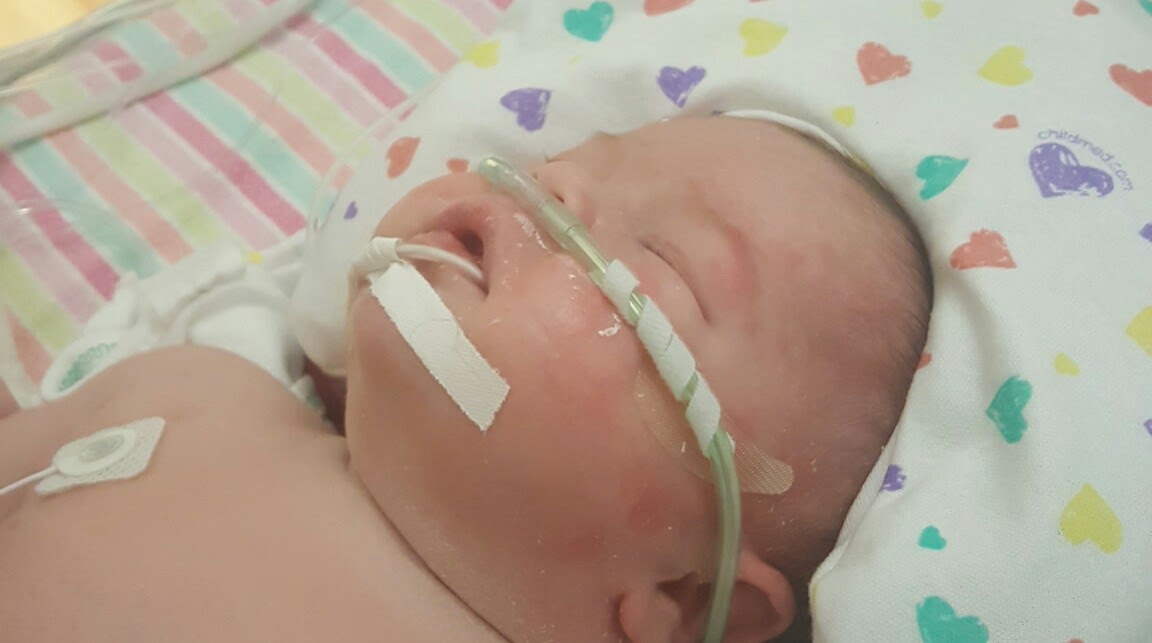 She was breathing on her own with the help of a nasal C-PAP. About 15 minutes went by (all the while I am in disbelief that she had this sudden turnaround in the last 24 hours and feeling like it was too good to be true) and she opened her eyes. These beautiful eyes locked with mine and we had a very peaceful couple of minutes looking at one another.

But then I could tell something was off. She started to get agitated. She was arching her back trying to breathe. Her chest started retracting (caving in upon taking a breath). I looked up at the monitor and her blood oxygen levels were falling. I ran to get help and the room crowded with doctors, nurses, and respiratory therapist staff. It was obvious she needed re-intubation because her airways were too swollen and she couldn’t get air to pass through them. I crumbled onto the nearby couch and just cried silently as they brought out the supplies to hook her back up to the vent.

Holding her on Christmas was officially out.

They needed to give her a course of steroids to shrink whatever swelling was likely present from her first traumatic intubation over a week prior. But in order to do that, they needed IV access, which is tricky in newborns as IV lines don’t hold long in babies. We were told it’s great if you only have to change the line daily because sometimes their tiny little veins can only hold a line for a shift! Her steroids needed to be given through her IV as well as her continuous sedation since she was on the vent…so the ideal line would be a PICC line but they’d just taken hers out.

It was now a race against the clock to get a PICC line. She had an IV in her foot at that point but it had taken several attempts to even get that. Over the course of about 12 hours they tried to get a PICC line a half a dozen times and they couldn’t get it. They even had to shave her head to attempt one but no luck. I didn’t know they’d done this until I walked into her room and saw her hair gone…and I immediately started just bawling because I wasn’t present for my baby’s first haircut. 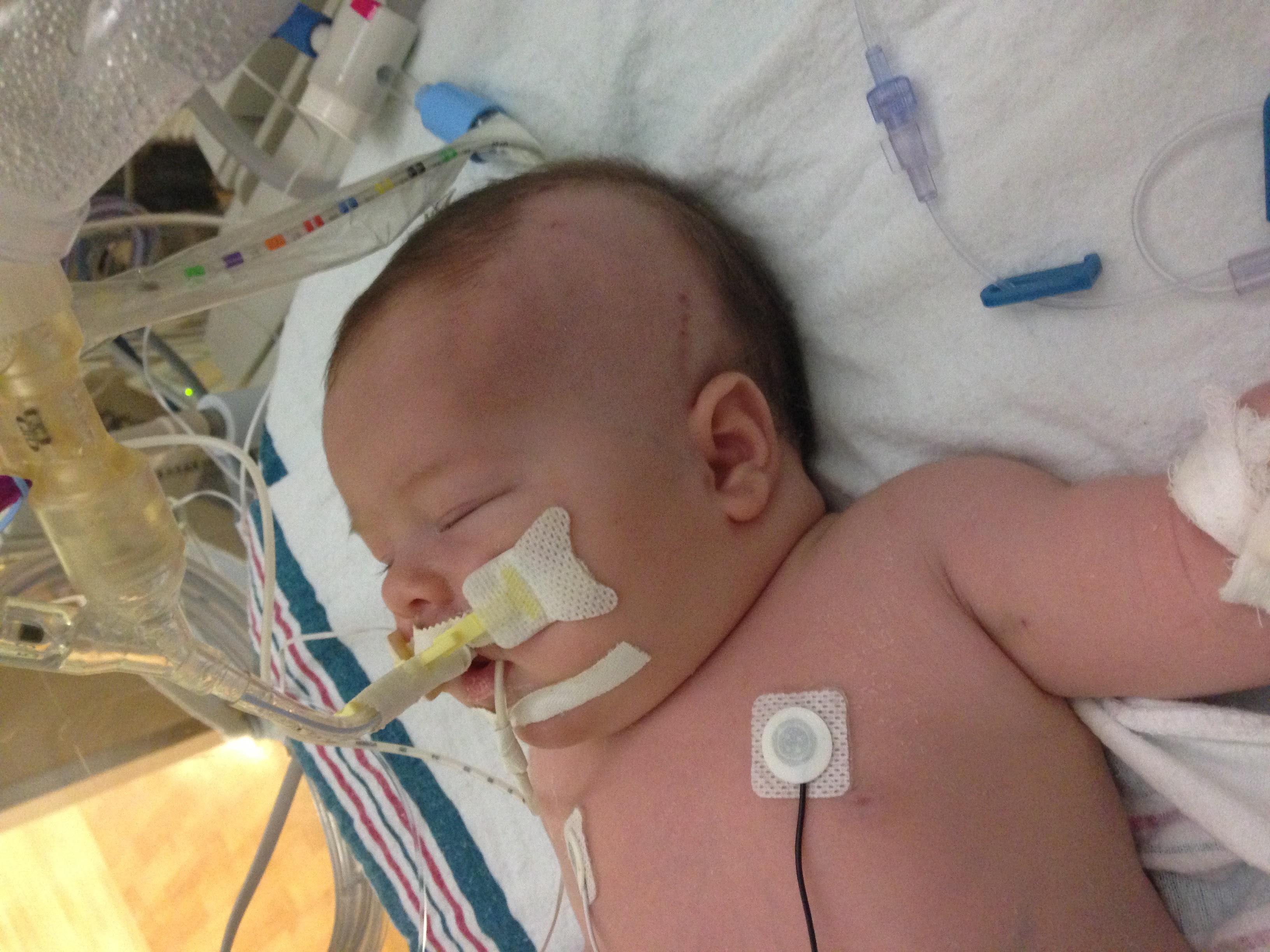 UAMS staff weren’t hesitant to say we’d reached the limit on their scope of care and that Charlie needed to be transferred to Children’s Hospital in Little Rock to get a PICC line, as they had more technology to help them get one in.

All the while they were still measuring Charlotte’s blood gasses since she had her failed extubation incident and they were getting worse and worse with each draw. She was regressing. They had to bump her way back up to 100% oxygen again and the called the Children’s Angel Flight staff to bring an ambulance over for her transport.

The team arrived around 2:30pm and it took almost an hour to get her ready to get in the ambulance. At one point I almost fell over and forgot I hadn’t eaten that day so Jonathan got in his car to go grab Chipotle and Starbucks (it was gonna be a long night!) and meet me at Children’s Hospital so I could eat while they settled Charlotte into her new bed. It actually turned into quite the funny and heart-warming story:

It was Christmas Eve and I remember thinking the next 24 hours will either make Christmas a wonderful day or a very sad day in our family over the years to come. 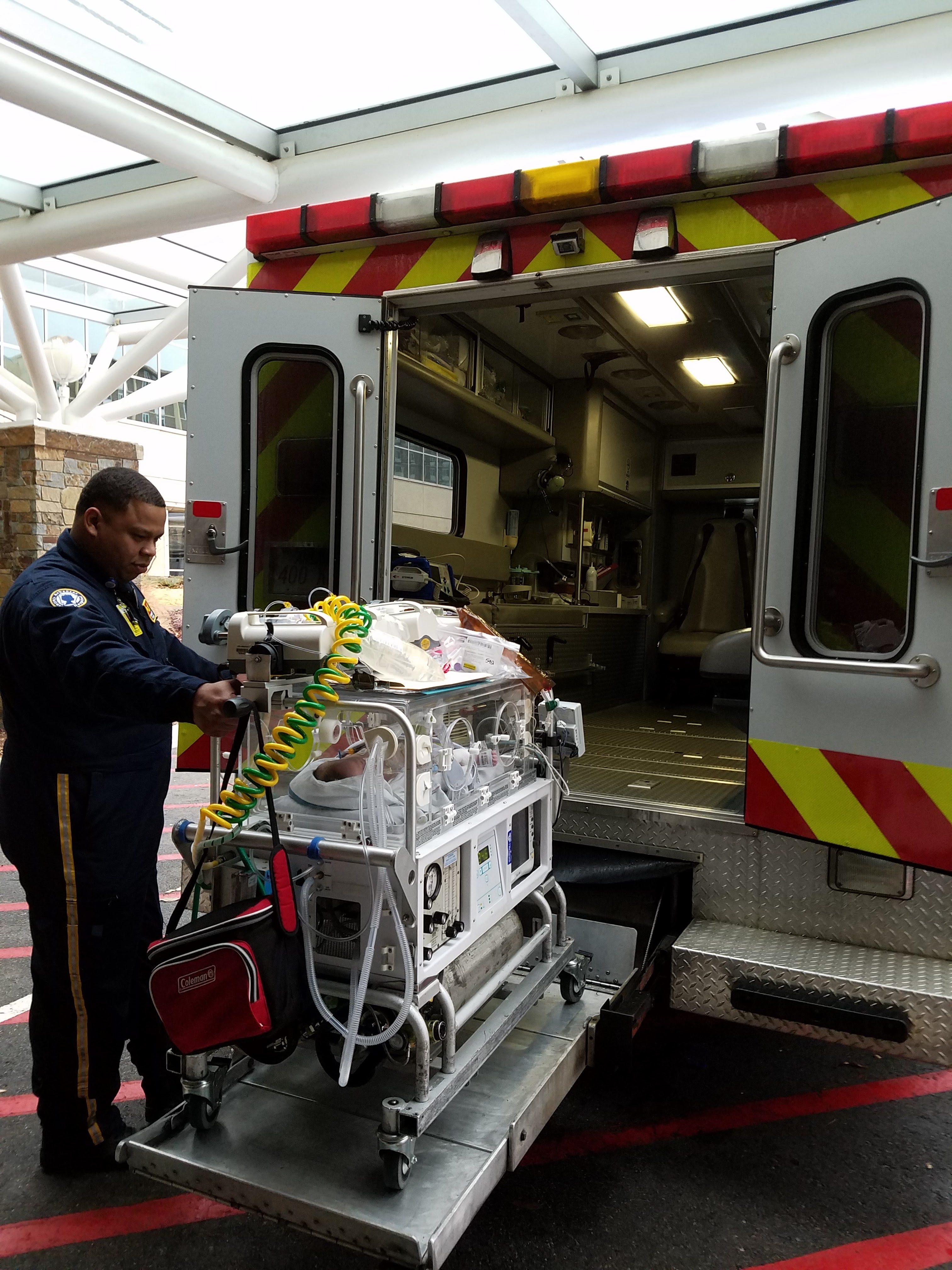