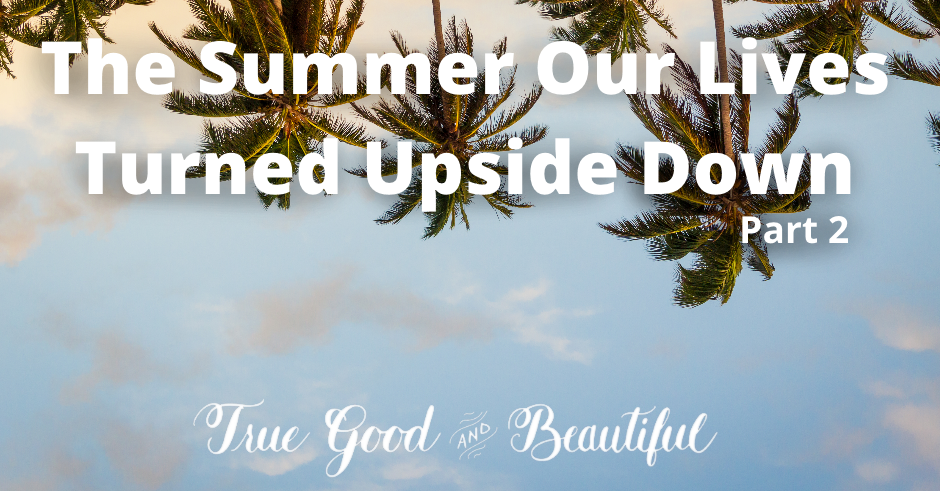 Alright, that cliffhanger was pretty mean.

I’ve gotten a lot of inquiries as to when Part 2 was coming and that made dragging out the suspense more appealing! 🙂 Hopefully I was able to help you grow in patience.

So where did we leave off?

Ah, yes, we returned to Colorado feeling like God was about to shred our entire world. Delightful.

Around this time we felt like we needed to be intentionally praying and a 54-Day Rosary Novena fit the bill. We knew that major stuff was about to go down. A couple intercessory prayer sessions or an Our Father just weren’t going to cut it. We needed the nuclear weapon equivilent prayer and this novena is it. We don’t use it often but when we do…look out is all I’m sayin.

The Summer Projects in Estes Park were going wonderfully. The students were growing closer to Jesus and learning how to share their faith with others…which is all I ever hoped for. Visiting them was always so refreshing and such a taste of adventure and beauty. We got to camp on top of a mountain and it was so much fun. We also realized that our family has outgrown the single person tent we owned.

This is where our little family slept, snug as bugs last night. That view will never get old. ?#estesparkproject

Back down in Denver, we were still waiting to hear something….anything….from Spirit Catholic radio. I don’t do well with waiting (understatement of the millennium) and so I kept busy busy busy. I jammed my social calendar chock full. I ran ALL THE ERRANDS I could think up. I did every house project that’d been on the Honey-Do List for the past year.

Not always good for me (since I am addicted to being busy) but I needed to stay mentally engaged, lest I panic over what God was about to ask us to do.

On a Wednesday in the middle of July, Jonathan got a phone call from KVSS Spirit Catholic radio in Omaha. He was offered the job!!!!!!

We were over the moon excited! My parents happened to be in town so we all went to Bad Daddy Burger (yummmmm) to celebrate. We took the next few days to pray a bit more and it was crystal clear this was the path we were called to say “yes” to. That decision broke his heart on one hand because he LOVES FOCUS dearly. But he loves Jesus more and had to say yes to where he was leading us and this was it. We were filled with peace, joy, and excitement. (FYI – I am still with FOCUS, working remotely from Omaha.)

Because I had done all those house projects and cleaned like a boss, our house was ready to go on the market two days later!!!!!

I know, I know. I’m hyper and obsessed and no one lists their home like a day after deciding to sell it. I am not normal and you must accept me as I am.

Once the house was on the market, people were flocking to it like sharks on a baby seal. We had constant showings and within two days we had 7 offers! This is when things began to get hairy and I won’t go into all the details but over the next week and a half, we accepted two offers and both buyers had to back out of the deal. One due to a legal battle our HOA is currently in and the other over buyer’s remorse. We then had to go back on the market, on an slow day of the week, after four other town homes in our complex also came on the market. So our offers that were looking like $10K-$15K over asking price turned into just plain ole asking price. That’s not terrible for most markets but asking price in DENVER? Unheard of!!! Asking price is seen as a starting point for the bidding wars.

But we liked the young Christian couple who offered and we just needed to sell the house, so we took the bird in the hand and began planning our move to Omaha.

We rolled into Omaha with peace and confidence that we were right where we were supposed to be. The house hunt (another blog series!) was a hot mess of a month. We finally signed on a house last Friday though, and we’ll have a place to call home soon. The settling process is going to take a lot of time and we’re fairly certain that God isn’t done changing things up on us yet. I think we are about 30% through the changes he’s making in our lives. It’s scary to think about what else is coming down the road but he’s proven time and time again that HE’S GOT US.

After a wild ride of a summer, I choose to cling to that truth. Here’s hoping I remember it when the next phase of change rolls in.