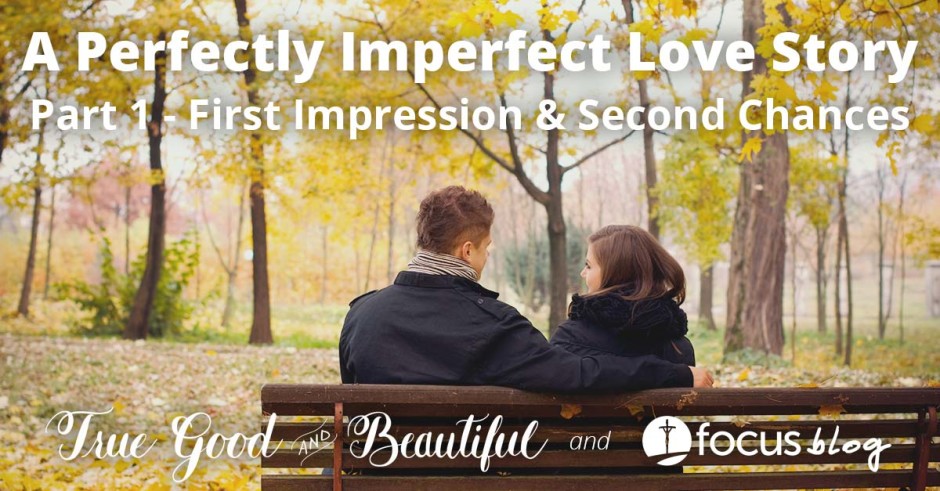 This is Part 1 of a 3-Part series.
This post was originally published on the FOCUS Blog.

With all this talk about dating and relationships, Jonathan and I wanted to share our story with you.

Since we have the most perfect love story ever written.

We totally don’t have the perfect relationship and that is why we want to share our story. We will be tag-teaming this post, switching back and forth between our two perspectives as we tell the story and discuss lessons we learned along the way.

There I was, freshly graduated from college and a brand new FOCUS missionary. I was embarking on a one-year dating fast and to be honest I was very excited about it.

I had just come off a discernment roller coaster the previous year. It’s a long story but I had seriously discerned both marriage and religious life in college and was hoping Jesus would call me to be his bride even though it wasn’t looking like he was going to. #CatholicGirlProblems! (PS – Don’t be afraid to discern religious life, it’s awesome!)

It was the very first week of FOCUS New Staff Training and I remember vividly walking up a hill towards the building we would learn about how to fundraise our income. I was scared out of my mind and could feel butterflies in my stomach. To my right I begin to hear music…”For The Love of Money” (money money money money, mo-ney!) began to get louder and louder. I peered over my shoulder and this guy had his computer propped on his shoulder like a boombox playing this song. He danced up the sidewalk without a care in the world. The I noticed the long pony-tail…down to his elbows.

I was not impressed. Mr. Jonathan Teixeira was immediately filed into the “friend” zone and that’s where I intended to keep this goof-off who couldn’t take life s.e.r.i.o.u.s.l.y.

That summer, too, was my first year as a missionary with FOCUS. My only memory of Amanda from that summer was one afternoon near the end of training during which I played Korean rock-paper-scissors (think of regular RPS but with a layer of deception and slapping each other built-in) with a group of people which included Amanda. She was pretty competitive, and she slapped hard.

Fast-forward two years to the summer of 2010. My spiritual director had recently told me I was “beating a dead horse” in trying to make Jesus call me to religious life and I needed to move on. With that clarity, I felt a great deal of peace that I was finally ready for whatever God wanted to do with my life, even if it differed from what I thought I wanted.

That summer, Jonathan and I were at yet another FOCUS New Staff Training. This time around, we are both part of a smaller leadership group and finally had opportunities to actually get to know one another instead of making passer-by judgements.

We were at one of the smaller gatherings when it was time for some intercessory prayer. All of a sudden as I am deep in prayer, I hear a male voice start praying enthusiastically. I peaked one eye open and saw it was Jonathan Teixiera. What?! I thought that guy was a joke…but there was definitely a serious side, and it was clear he passionately loved Jesus and the Blessed Mother.

But wait? We didn’t really know one another…so how do I get to know this guy without being a creepster or emasculator?

Naturally, I threw a party at my house for 30+ people and invited Jonathan in hopes I would end up getting to talk with him one-on-one. I was confident that once he saw the real me, that’s all it would take to get him to reciprocate feelings.

So, there was a party for all the missionaries going into their third year with FOCUS. I went to the party and agreed to go a little early to help set up. Amanda picked up me and the other helpers and took us to the house.

Later that evening, I got into a conversation with a group of people and what do you know, Amanda entered into that group. Before I know it, the rest of the group was gone, and Amanda and I had been talking for 90 minutes.

The party wound down, and since I helped set up, I figured I’d help clean up. Later, it was time to head back to the dorms, and Amanda and I walked to her car. Turns out, everybody else who had gotten a ride to the party for Amanda had already left. It was just Amanda and I in the car. Alone.

We’re chatting, and in the middle of a sentence, a HUGE lightening bolt streaks across the sky. At the same moment, we both let out a “OH WOW! COOOOOL!” exclamation noise. It was at that moment, when Amanda allowed herself to have such a genuine, impromptu, childlike reaction that I first though, “Hmmmm, there may be something to this Amanda girl. hmmm…” That night, I figured I might try to get to know her a little better.

I started to notice Jonathan “sharking” around.

What I mean by that is he was always on my perimeter. Whether I was going out to pizza with friends, rafting, playing soccer, or eating dinner, Jonathan was around. He would come up to chat me up at least once or twice. I stayed engaged and interested in our conversation, hopefully letting him know I thought he was interesting and cool. It’s a fine art to master in letting a guy know you are interested without spelling it in the clouds.

I knew the attraction was there and it was only a matter of time until he made his move.

I had crossed paths with Amanda a few times that week. She was always very nice, so I figured I’d ask her out. I got up the nerve and decided to ask her on our first break from classes of the day. The break came, and I made my way over to Amanda. My hands got all sweaty, heart pounded… and Amanda was talking with somebody else. I didn’t want to go over and say, “Excuse me, could I interrupt your conversation to ask Amanda on a date,” so I figured I’d wait until she was relatively alone. Which took ALL DAY.

Finally, after Mass that evening, I noticed Amanda praying in the pew before leaving. I thought, “Oh, a short thanksgiving prayer after Mass. I’ll wait a minute or two, catch her on her way out of the chapel, and talk to her before anyone else gets the chance!” Turns out, it wasn’t a short thanksgiving prayer, but AN ENTIRE ROSARY. 25 minutes later, she finally leaves the chapel, and immediately runs into one of the chaplains and begins a conversation with him! I walked past them and hoped I could catch Amanda after they talked.

They ended their conversation, and Father turned right to go to the rectory. Amanda turned left to go to the cafeteria for dinner. She was alone! “Now’s your chance,” went the voice in my head. “You ask her now, or you’ll never have another chance! Go! Now!” I stroll up to Amanda and start some small talk. We walk towards the cafeteria full of missionaries, and arrive to the entrance of the dinner line. I wish her a good dinner… and turn to leave! “You didn’t ask her, what are you thinking?! You blew it!” I turn around, “Amanda?” I say. “Yes?” she responds. “Would… uh, are you… are you doing anything later to-to-tonight? Would you like to get.. ice cream?” I stammer out. She responds, “Yes!” with a perfect mix of excitement and grace. I respond to her yes by high-fiving her, turning around, and running away! Whaaaat? No details, nothing. It’s a wonder we got together later that night.

He finally asked! 🙂 Of course I ate the fastest dinner of my life, ran upstairs, and had my fabulous roommate dress me up. We went on that ice cream date and had a lazy stroll around the park. That night after our date, I went upstairs, got ready for bed and laid down. I was so excited that I couldn’t sleep. So nearly an hour after the date, I walked down to the chapel…and what do I see?

Jonathan…kneeling alone, up front, right in front of the tabernacle. When we parted ways, he headed in that direction…which means he went to pray after our date. I knew this guy was a keeper and was excited to keep getting to know him.

And of course I proceeded to hide in the back of the chapel in the dark so he wouldn’t see me spy-praying.

The ice cream date went well, and I was interesting in spending some more time with Amanda, getting to know each other. I asked her on another date, and she said yes.

We had a nice casual first date, but I thought I should put a little more effort into this next one. I researched some fun things to do in town, and took her to do them. This date may have involved digging fake dinosaur bones, drinking vintage sodas, and eating cow tongue tacos. She may not have enjoyed those tacos, but she really enjoyed the date.

I kept asking her on dates, and she kept saying yes. They gave us a great chance to get to know each other. We really enjoyed each other’s company, and had a talk about what we wanted to do with training coming to an end and us no longer living in the same town. We decided to give an exclusive relationship a shot.

Summer training was coming to a rapid end and I was living in Champaign, IL and Jonathan in New York City, NY. We started “interviewing” other couples who made long-distance relationships work. Things we heard were “monthly visits” and “Skype dates 2-3 times a week” in addition to obvious check-in phone calls throughout the week.

With all their advice, we took a leap forward and said our summer goodbyes knowing we would be long-distance from there forward.

Stay tuned for next time, when we talk about growing from a tiny budding relationship to starting to have deeper discernment conversations.