Pope Francis – The Sacrament of Marriage 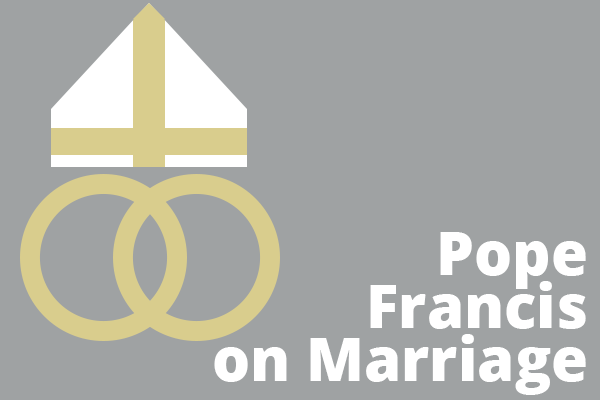 In my daily inbox is an email on what the Holy Father’s been up to, what he’s been saying, and who’s visiting him. I feel like I can be part of his day in a concrete way. It’s great. If you want to begin stalking Pope Francis by email too, sign up at Vatican Information Services.

Every now and again, one of his homilies totally hits me to the core. Today (or yesterday since they are ahead of the US) Pope Francis spoke about the sacrament of marriage. I really appreciated it, especially this line, “There are always arguments in marriages, and at times even plates are thrown.” Yup. No plates have been thrown at the Teixeira house…but I am positive some paper has been ripped a part and pillows have been punched/yelled in/bit.

But that grace of the Sacrament is there. Peace is restored. Love triumphs. God’s image is reflected.

I can’t say anything better than Pappa Francis himself, so read on, friends and enjoy!

THE SACRAMENT OF MARRIAGE, ICON OF GOD’S LOVE FOR HUMANITY

Vatican City, 2 April 2014 (VIS) – Pope Francis concluded his series of catechesis dedicated to the Sacraments by speaking about marriage. “A sacrament that leads us to the heart of God’s plan, which is a plan of alliance with his People, with all of us, a plan of communion” . To explain this, he quoted a phrase from the Book of Genesis: “So God created mankind in his own image, in the image of God he created them; male and female he created them. – That is why a man leaves his father and mother and is united to his wife, and they become one flesh “. “The image of God is a married couple, man and woman, not only man, not only woman, but rather both. This is the image of God: love, God’s alliance with us is represented in the alliance between man and woman” , he said.

“We were created to love, as a reflection of God and his love. And in matrimonial union the man and woman realise this vocation, as a sign of reciprocity and the full and definitive communion of life” . When a man and a woman receive the Sacrament of marriage, “God is, so to say, ‘mirrored’ in them, he imprints in them the features and indelible nature of His love. Marriage is the icon of God’s love for us. Indeed, God too is communion: the three Persons of the Father, the Son and the Holy Spirit have always lived and live for ever in perfect unity. And this is the mystery of marriage: God makes married couples into one existence. The Bible uses a strong term: it says one ‘flesh’ only, so intimate is the union between man and woman in marriage. And this is the mystery of marriage: God’s love that is reflected in the couple who decide to live together” .

Francis mentioned that, in his Letter to the Ephesians, St. Paul emphasizes that Christian married couples reflect the great mystery of the relationship that Christ establishes with the Church, which means that “marriage responds to a specific vocation and must be considered as a consecration. The man and woman consecrate themselves in their love. Married couples, thanks to the Sacrament, are invested with a genuine mission, that of making visible, starting with simple and ordinary things, the love Christ has for His Church” .

“The plan inherent in marriage is a truly wonderful! It is expressed in the simplicity, and also the fragility, of the human condition. We are well aware of the many difficulties and trials there may be in the life of a married couple. … The important thing is to keep alive the link with God, which is at the basis of the matrimonial bond. When a husband prays for his wife, and a wife for her husband, the bond remains strong; each one prays for the other. It is true that married life has many difficulties: work, there isn’t enough money, there are problems with the children … and often the husband and wife become irritable and argue amongst themselves. There are always arguments in marriages, and at times even plates are thrown. But we must not be sad about this: this is the human condition. And the secret is that love is stronger than the moments in which we argue, and I therefore always advise married couples never to let the day draw to an end without making peace. There is no need to call in the United Nations peacekeepers. A little gesture is enough: a caress, see you tomorrow, and tomorrow we start afresh. This is life, and we must face it in this way, with the courage of living it together. Married life is beautiful, and must be protected”.