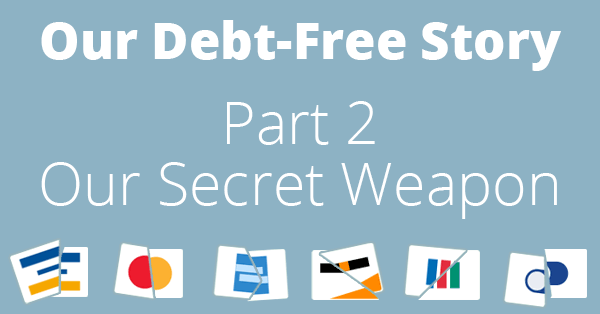 At the end of our Debt-Free Story Part One, we left you hanging with us having our “I’VE HAD IT!” moment.

We were officially sick and tired of being sick and tired. We didn’t want to see hundreds of dollars being shipped off to Sallie Mae on a monthly basis. We were inspired to kick her to the curb using Dave Ramsey’s baby steps.

There we were, fuming with excitement, so what did we do next?

We had our very first “Teixeira Budget Committee Meeting” on December 30th, 2011 to plan our January budget.It was quite simple back then. We grabbed a pencil, paper, and some envelopes for cash. (vital to all beginner budgeters…since when cash is gone it’s gone and it’s a built it “stop” to spending)

Looking back, it was actually hilarious since we fumbled our way through varying categories and were bad at estimating the cost of things. I think we budgeted $50 for groceries for the month. Yea…that needed adjusting! 🙂

Despite being bad at budgeting from the first go, we had tremendous amounts of zeal and passion for it. We were finally a team. We were on the same page. Nothing could stop us from getting that very first baby step done – $1,000 in a mini emergency fund.

We found a way to shuffle the budget around to compensate for our under-funding certain categories and over-funding others and by the end of January we had baby step one completed! We were on track to paying off our student loans within one year’s time.

We then turned our gaze towards that pile of debt. As the months crept by, we not only got better at creating a budget but also sticking to the budget! We found that the more realistic we were about our budget and stuck mostly with cash, we were having great success not over-spending or feeling guilty for the spending we did do. By cutting discretionary spending, it allowed us to begin throwing more lumps of mula towards our loans.

Here’s what I mean by cutting our lifestyle based on a typical monthly budget back then:

Obviously we had some fixed expenses like rent and healthcare but every category relating to our lifestyle was bare bones. It actually was barely enough. Sometimes we rode bikes to work when we were almost out of gas money. Or we would make pb&j sandwiches for days on end with baby carrots and celery on the side when we wanted to stretch the grocery funds. Or instead of buying a new mattress, we slept on a (clean!!) donated mattress from someone’s old RV.

Did we need to do this?

We were squeezing thousands of dollars from our budget every month. We could have decided to be a little softer on ourselves. Seen more movies. Gone out to eat. Taken a road trip. Bought whatever we wanted at the grocery store.

But at what cost? Months and possibly years longer to get out of debt.

We wanted it done NOW. Our desire to become debt free was so intense we literally were willing to sacrifice everything but necessities to meet that goal. We would rather suffer a short but intense time of delaying gratification than several years of lukewarm spending/paying debt.

In March, we got tax refund and combined it to the funds we’d scraped up our of that month’s budget for an extra large payment towards the student loans. That is when we started to really feel momentum pulling us. Dave calls it the “debt snowball” since it starts small and over time gets larger and larger with more momentum.

We were officially weird and gazelle-intense. Friends and family thought we were taking things just a little too far….and that is exactly where we wanted to be! 🙂

The debt started falling rapidly and with every dollar thrown at it, our confidence and excitement grew. We quickly went from first-time fumbling budgeters to budget pros with a goal no one could stop us from reaching!

Stay tuned for next time as we talk about how we were able to beat our initial goal of a one-year debt payoff by nearly five months! And jump over to win a FREE Financial Peace University class membership!