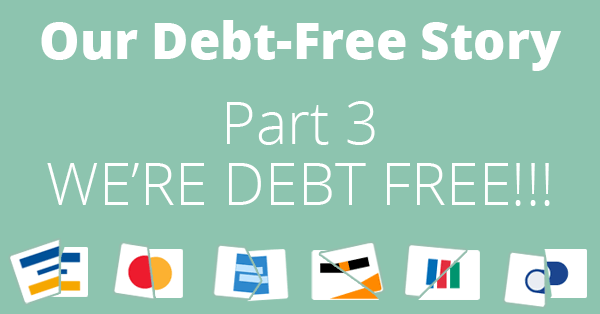 This is Part 3 of a 3-part series. Be sure to read about Our “We’ve Had It!” Moment and Our Secret Weapon.

We left off in part two when we were knee-deep in debt but with gazelle intensity and a laser focus to pay it all off ASAP. We even shocked ourselves and beat our “debt-free date” by nearly five months!!

How did we do that?

Let me tell you…

So there we were, Spring 2012, with between $15,000-$18,000 of student loan debt left to go when we got the tax return funds and threw it towards the loan. The numbers fell significantly that month and momentum started rolling like crazy.

At this point, we sort of snapped and went scorched earth. We also found out we would likely be moving in two months time, so we started thinking about all the things we could purge from our household and turn into quick cash to pay towards our loans.

Sometime in April, I gathered up items from our house in the living room and began listing them on Craigslist left and right.

Bicycles. Nintendo. Lamps. Throw pillows. An HDTV Television. A desk we dug out of a dumpster. A chair we got for free.

If it wasn’t nailed down, it was on the “discuss to sell” list. In a two week window, we had people at our town house nightly, one after another, purchasing items from our living room garage sale. 🙂

We ended up with a couple thousand dollars from our sales…but still had to live in the place for a few weeks before moving. Yup, it was rather uncomfortable sleeping on a blow up mattress, having no lamps, furniture, or Nintendo to play with. But we were brimming with happiness and joy at seeing more progress on the student loans. It became like a game to sacrifice more and more so we could see the debt fall quicker…so we happily played board games under a light bulb on a string in the closet.

To keep the gazelle-like intensity up, we decided to sell my car and drop down to a one car family. It sounds harder than it was, since we actually work together. The times we actually needed two cars was far and few between. This got us some extra cash to throw at the debt and lowered our car insurance bills and gas costs.

To top it all off, we had unusual circumstances that summer. We moved out of our apartment in May but didn’t find a place in Denver to live straight away so we put all our belongings in a storage unit. We traveled that summer working on our fundraising and staying with family. Upon moving to Colorado, a family invited us to stay with them while we searched for housing. With those circumstances, we didn’t have any rent and minimal food expenses from June through August, which was a MASSIVE help in our debt snowball.

In late July, we saw the numbers really plummeting and we were just ITCHING to get it all paid off the next month. We received a few special donations in larger lump sums which gave us the extra cash flow to pay the loans off earlier than we ever anticipated. We kept living on a bare bones budget and scraping money our of thin air, hoping we could have an August debt-free date.

To celebrate, we made doughnuts and started forming a plan for the next baby step, the fully-funded emergency fund! A few months later, we traveled to Nashville and did our Debt-Free Scream on the Dave Ramsey Show. Someday we will tell our “post-debt-free story” and the unique challanges and freedoms that come with each baby step.

Until then, here’s wishing financial peace for everyone reading this! You can enter our Financial Peace University Giveaway to jump start your journey!

The May Budget Breakdown