Nursing Josie: The Good, The Bad, and The Ugly 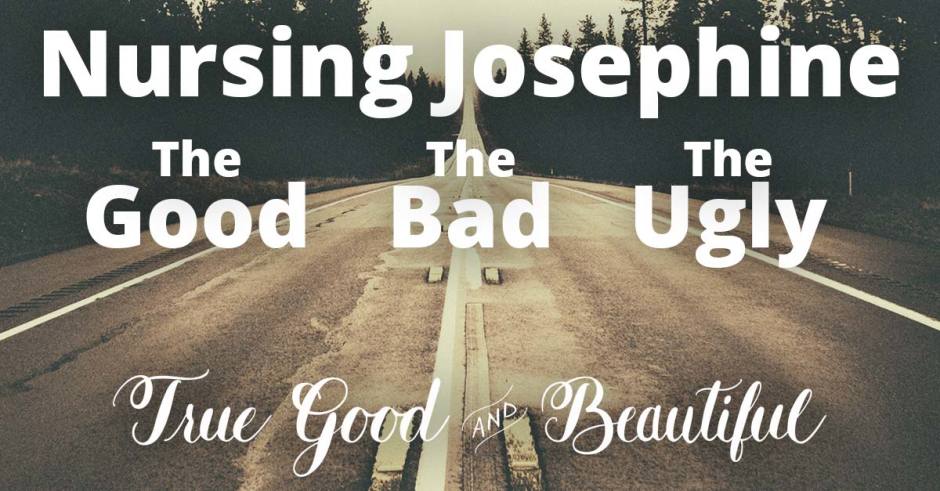 After my last post on How and Why I Induced Lactation, I got a lot of questions as to how it’s going. So, for those who asked (and anyone else who’s interested) here’s the rest of the story.

Before I get into the details, I have to commend ALL breastfeeding moms out there. Breastfeeding is NOT for the faint of heart. It’s hands down been the most difficult and emotional thing I have ever done.

We’ve had some major challenges and victories along the way. It’s been a journey of highs and lows and I want to be very real about that with our readers, especially those considering lactation induction. There have been days I have doubted why I ever induced lactation and if I made the wrong decision because of how hard this is. There are other days when I am confident this was a good decision and we reach a new milestone or have a breakthrough.

And round and round the merry-go-round we’ve gone.

Josephine was born November 10th, 2014. Her birth mother (Tiffany) and I planned to tandem nurse her in the hospital for two reasons –

1. I could continue maintaining supply and get nursing practice

2. Josie could fill up on colostrum with Tiffany, getting all those awesome health benefits

Before Josephine was born, my max production in any given day was between 7-8 ounces of pumped milk. I knew this would be enough for her the first couple days of life when her tummy was oh so tiny but I was nervous about what my supply would do after she was born.

“That baby will bring your milk in with a vengeance.”

“The baby will be far more efficient than the pump.”

“Your supply will just grow with what the baby needs.”

Granted none of those women had induced lactation. They’d given birth and had 9 months to prepare their breast tissue for this “surge of milk supply” that they thought was coming my way upon the baby’s arrival.

While supply worries were on the back burner in the hospital, my anxiety quickly shifted to the nipple blisters I was getting from Josie. A nurse came and gave me some instructions on how to “sandwich” my breast to help Josie get a deeper latch. Once I figured out how to hold her with one hand and sandwich my boob with the other, the pinching sensation and blistering went away. Whew!

We left the hospital and things were going pretty well until day 5 hit.

That night Josie woke up to nurse every hour…and it would take her 30 minutes to eat. That meant that by the time we laid her back down and fell back asleep ourselves, she would be up crying and wanting to nurse again 15 minutes later. It was the longest night of our lives.

The next morning I was going crazy with sleep deprivation. I just wanted her to stop crying and my gut said that she was hungry despite all this nursing. I busted my pump out and hooked it up…to find nothing on tap at the milk bar. I was empty and this wasn’t news to Josie. She was angry and frustrated. Even placing her in the nursing position caused her to arch her back, fighting to get away from my breasts.

In our frustration, we bottled up some pumped breast milk from previous days and gave her a couple ounces. She sucked it down like a starving child and slept peacefully for 3 hours.

Enter Satan and his lies creeping in:

“She hates nursing since you aren’t her “real” mom.”

“Why did you even induce lactation? You won’t be able to do this.”

“You can’t have babies and you can’t even nurse babies. Your body is broken and unable to function.”

Every negative emotion you can think of was swarming my mind. Guilt. Envy. Fear. Anxiety.

I was a hot mess and Jonathan was at the receiving end of my wrath. I was like a caged animal who was unpredictable and looked ready to snap at any given moment in time. Of course all this anxiety was leading me into depression and my supply started to tank. Since Josie was on a nursing strike and refusing to latch, I had to start bottle feeding her formula since I couldn’t pump enough for her needs.

I turned to my Adoptive Breastfeeding Facebook group for support and decided to try using the LactAid supplemental nursing system to begin supplementing instead of using the bottle. Sometimes she would accept it at the breast and sometimes we would have to tape the tube to our pinky finger to feed her that way. I also learned that it’s incredibly RARE to get a full supply if you didn’t give birth before and if I am to get a full supply, it will take time. Like months. Not the days I was promised by other nursing moms.

Around this time is when I started cussing again. I haven’t really cussed consistently in about a decade…until I started hitting nursing issues. Every swear word has made it’s way back into my vocabulary. I am not happy to admit it but when you combine zero sleep, a screaming baby, and my cave woman’s desire to feed my baby and inability to do so…sometimes cussing ensues.

Even with the LactAid, Josie was not having it at the breast. She panicked when we even put her on the Boppy pillow to feed.

I called a Lactation Consultant and set up an appointment immediately. She came to the house we were staying at in Sacramento and in the 90 minute visit, she had Josie latch twice using the laid back nursing position. It was her way to “trick” her back on the boob. We also had the LactAid set up so Josie was actually getting a flow of milk when she sucked.

All of a sudden Josie refused to latch again. The same old back aching and screaming meant something wasn’t right but I wasn’t sure what was going on. I was panicking again and wrote to some moms in FOCUS to help. Someone referred me to a local Lactation Consultant here in Denver and she came over the next day.

We discovered that Miss Josie was severely congested. Once we got her unplugged, she was latched and going strong at nursing yet again with the help of the LactAid. We also discovered that she has a stage 3 upper lip tie, which compromises her latch. This has been leaving me with vasospasms and slower supply build. This has left Josie with poor ability to latch, a weak suck, and increased gas.

Two weeks ago, I wanted to know how much milk Josie was getting from me and how much we actually needed to supplement her. We rented a scale and have been weighing her before, when we switch breasts, and after. It’s been tedious but pretty neat to see the actual results. The first week I was making about 10 ounces a day. Just yesterday I was up to 11.667 ounces for the day. So my supply is building but I do still have to supplement her with 1-1.5 ounces of donor breast milk every time we feed.

I have high hopes that we will keep building my supply and someday I can fully ditch the LactAid device with it’s stupid little tube and tape. We have an appointment in a few weeks for her upper lip tie to be evaluated and possibly lasered at a pediatric dentist office in town known for doing this procedure. I think that will be freeing for all of us – she will be able to nurse better, my nipples will be less sore, and she will drain my breasts more efficiently which will build my supply.

It’s been a tedious labor of love to persevere with breastfeeding. I have almost thrown in the towel on n.u.m.e.r.o.u.s. occasions. Friends and family have been so encouraging and supportive, especially Jonathan. I love that man more now than ever!

We still have quite the journey ahead of us, with the lip tie procedure and hopeful building of my supply. I will keep documenting our journey here to serve as a beacon of hope for those going through similar nursing issues.

Please pray to Our Lady of La Leche for my milk supply to increase if you remember today! 🙂

The Adoption Puzzle is Here!

Our Nursing Redemption: The Final Chapter

Your Favorite Posts Of 2014