This week’s Little Happies link up is brought to you by the sport of Basketball! 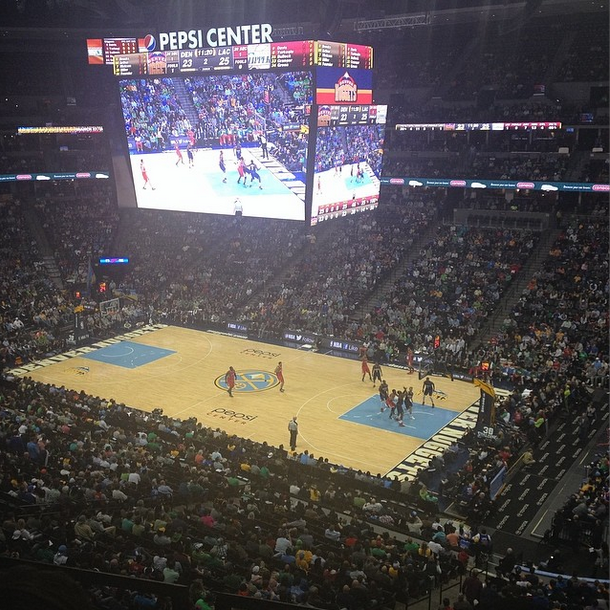 We got our overly salted tub of popcorn and found our seats in the nosebleed section (which we low-balled on scorebig.com for $10 tickets). We had no idea what to expect, with Denver coming off a losing-streak…

BUT this was one HECK of a game folks! The Nuggets battled hard all game long and finally pulled ahead for the win in the last few minutes. Final score: Denver 110 and Clippers 100. We talked about this game for at least three days, it was that good! 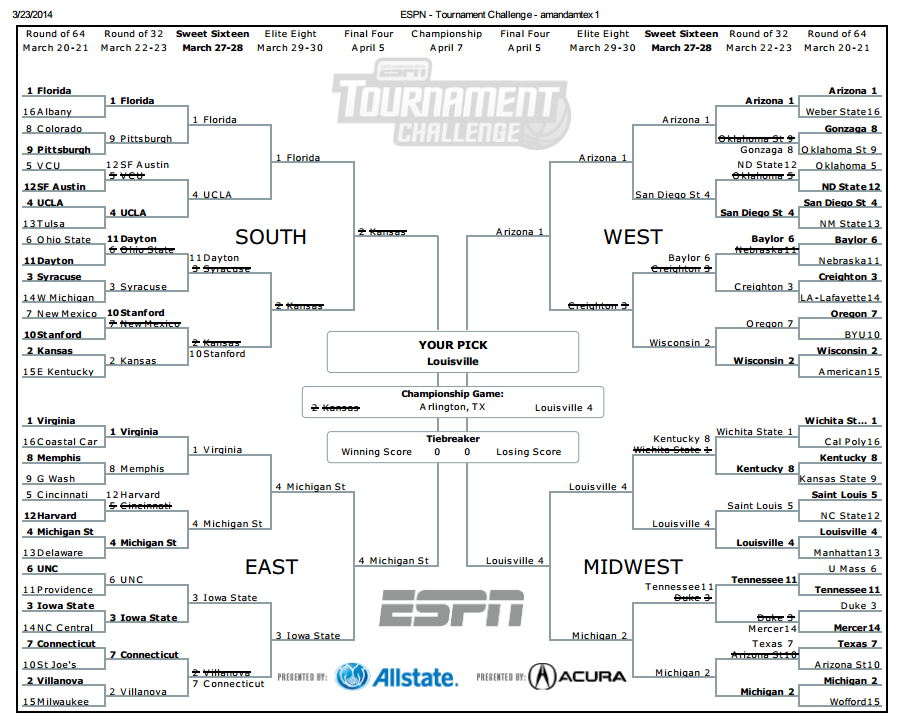 March Madness!! Above is a photo of my bracket (which has basically been torn to shreds at this stage).

HOLY CANOLI has this tournament been a wild one!

Anyone else out there who made a bracket (which is now also probably shot) is well aware of how bizarre/exciting these games have been. I can’t count how many games have come down to the buzzer or even OT. And the amount of upsets? Historically there have been no more than seven throughout a NCAA tournament. This year already? Nearly a dozen with more in store.

Breaking from basketball for a quick second… 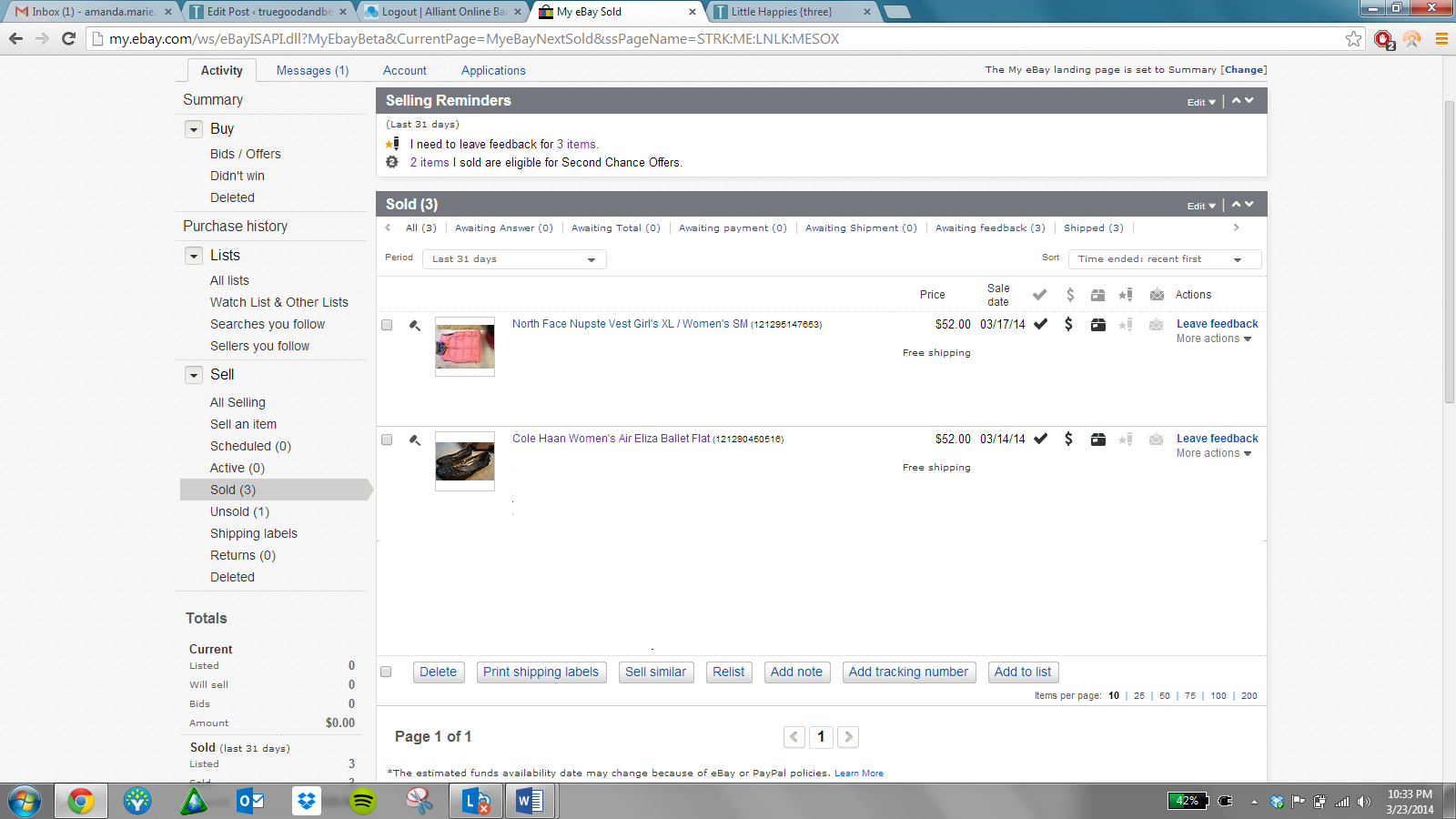 I sold more stuff on eBay!!

Remember those Cole Haan shoes I bought a few weeks back? Well they were size 7.5 and I am size 8.5…and was in denial about them fitting me. After an entire day of wearing them and two fat blisters later, I sold them. I also sold an old North Face vest that didn’t fit. Why do I buy things that don’t fit? 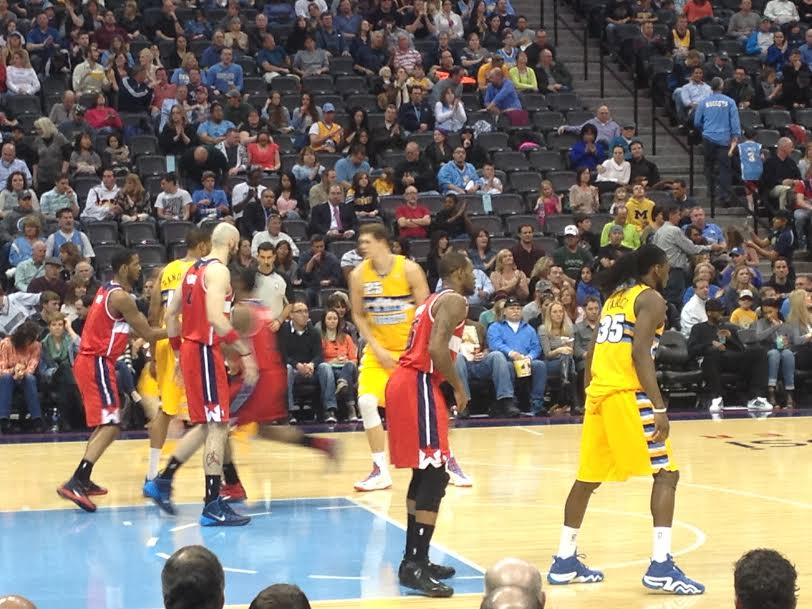 On Saturday evening, while we were sitting around (and sick) watching March Madness, a friend we work with emailed out FREE tickets to the Denver Nuggets vs Washington Wizards for Sunday March 23, 2014 (as in yesterday) to whoever wanted them.

Well, we’ve been on a huge basketball kick anyway, so why not go?!?!

Little did we know…

Again, the game did not disappoint. Jonathan caught a t-shirt from a parachute. We got our usual tub of salt with some popcorn kernels and we even splurged on splitting a small soda. I know, pretty wild huh?

The Nuggets won the game by a mere two points after a neck-neck battle. Final score? Nuggets 105 and Wizards 102.

Of course. That’s the story of basketball this week anyhow.

Stations of the Cross. 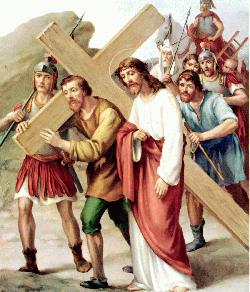 On Friday night, we went to our parish’s Stations of the Cross.

I wouldn’t say that meditating on Jesus’ passion, suffering, and death made me happy. BUT something really stood out to me that made me extremely happy. It was during the fifth station – Simon of Cyrene helps Jesus to carry his cross.

I’m not sure what grabbed my attention first but suddenly I became very aware that Simon wasn’t initially involved. He didn’t choose to help carry the cross. It was chosen for him. And that experience changed him forever.

I didn’t choose infertility. I wanted nothing to do with this. It was chosen for me in ways I likely can’t understand this side of heaven. But every time I look towards Jesus as we carry this cross together – I am changed. I hurt. I ache. At times I rage. But at the end of the day I know I am being changed for the better. I am being made holy despite my best efforts to resist grace. He’s transforming me just as he transformed Simon. Then this thought came:

The crosses that sanctify us the most are those that we don’t choose but Christ chooses for us.

And I experienced one of those fleeting moments of peace…We’ll be alright. God’s will is being done. Joy is still possible. The cross will carry me to heaven, so I can’t be afraid of it anymore.

And that my friends, is a Little Happy wrap!

“Rejoice in the Lord always!”