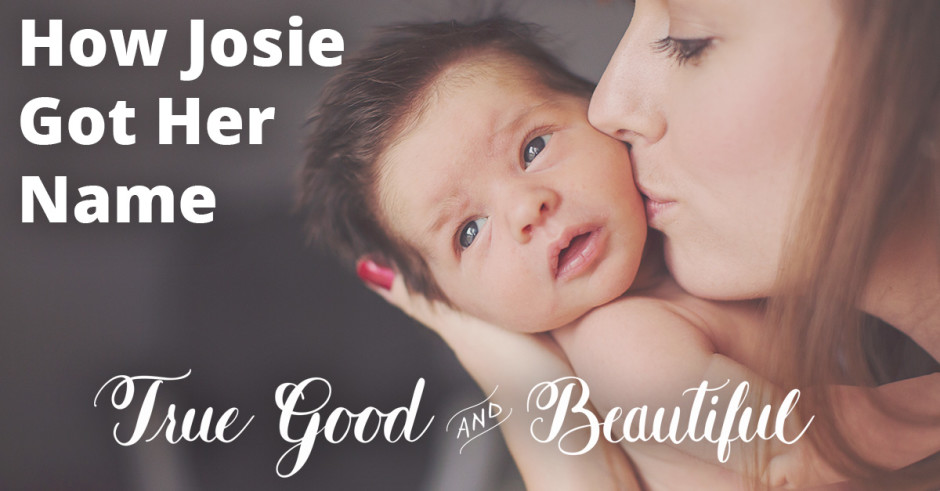 The name Josephine Rose wasn’t on our radar until only a few weeks prior to her birth.

But when we finally said that name out loud, it was instantly perfect. The name fit our story of waiting for her so well.

It all starts back during our days of dating. Jonathan was battling with some personal issues and in turn I was struggling to know where our relationship was supposed to turn. I prayed a novena to St. Therese begging for her help. I asked her for red roses and white lilies if I truly was on God’s path for me in dating and marrying Jonathan. What do you know, I show up at my home parish later that week and it’s FILLED with that exact flower arrangement. Moments later I was filled with peace that I was right where I was supposed to be.

I don’t know how but from that moment I knew the red rose and white lily would be a special sign to me of God’s love and promise that I was in the middle of his will for my life. There were times I would see the arrangement over the next couple of years and it was always exactly when I needed to see it. Always a source of comfort and peace, since the rose is a symbol of Mary and the white lily is a symbol of St. Joseph. I knew that with them praying for me, I was in good hands.

Until it got confusing.

A year ago Jonathan and I were in the middle of pretty invasive infertility treatments. We were trying some new medications and I was going in for ultrasounds to monitor my follicle development and hopeful ovulation 4-6 times a cycle. It was truly exhausting but I had more hope than ever that each cycle might be the cycle.

I was also extremely busy at work, planning and executing the FOCUS Greek Getaways. Let’s just say that between those and dealing with my infertility treatments, I was only surviving by God’s grace.

It was February 6th and I was in North Carolina for the Smokies Greek Getaway. Unusually I was actually a few days late and my period felt nowhere in sight. Could it be?!?!?!?! I called Jonathan excitedly and decided I wouldn’t test until after the Getaway since I needed to just get through the weekend first and foremost.

Our planning team went to pray and attend mass at a nearby Cathedral and upon walking in, I see a statue of Our Lady of Guadalupe, surrounded by white lilies and red roses. “I must be pregnant!” was the only thought in my mind. I was sure of it. I don’t just randomly see that arrangement of flowers. Ever. I sat down to attend mass, feeling peaceful and content, in awe that I was finally (or so I thought) carrying life within me.

Fast-forward one day to February 7th. I get my period. Hard.

I plummeted into a couple hours of extreme sadness and depression, knowing I needed to pull myself together so I could run a conference in only a few hours. I knew the students were worth offering my pain up for, so that is what I did. Offered it up for their weekend and moved forward, telling nobody what I was going through.

Now I was just mad. I NEVER see the roses and lilies randomly. Why now, when I undoubtedly thought we were FINALLY going to be parents? Nothing made sense.

Until this past August when Jonathan and I began to think about names for the baby we were hoping to adopt.

We were standing in a Marshall’s t-shirt aisle when Jonathan said, “I think I know the name of this baby girl. How about Josephine Rose, in honor of the white lily and red rose that has always been a source of peace for us.”

It sat with me for a moment. I thought back on that last time I saw the lily and the rose and got tricked into thinking I was pregnant. But then I realized something…

What’s nine months from those bleary February days when I saw the red rose and while lily, assured that we were FINALLY expecting a baby?

The due date our our baby girl. She might not have been conceived in my womb at the time…but she was conceived during those very days.

Everything clicked at once and I realized that I wasn’t tricked last February. It really was yet again, a sign that meant something special for me. A sign of hope.

Josephine Rose was the perfect name.

That evening, we looked up the name of Josephine…and it meant “God will add.” Yet again, perfect. God was adding this little lady to our family only in a way that was so undeniably HIM. On one hand, I couldn’t believe it but on the other hand? Totally could. This is the kind of story only God writes. I could never have made it this good.

From that day on, we knew that was to be this little gal’s name.

On November 10, 2014 when we finally held her in our arms and were able to call her Josephine Rose for the first time, it was so very special. It was a name filled with so much meaning and purpose…a perfect name for our new family’s story of finding one another.

Building Our Family Piece by Piece: Day One