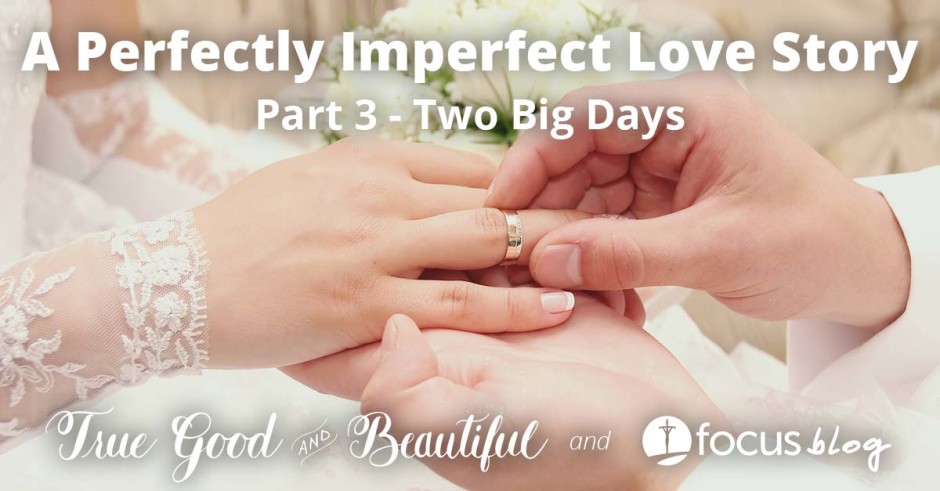 This is Part 3 of a 3-Part series. Be sure to read Part 1 and Part 2.
This post was originally published on the FOCUS Blog.

We shared about how we met, began dating, and endured some trials during our discernment of marriage. But at the end of it all, we both were confident that our vocation was to marry one another.

I know in part two it was difficult to capture the entire process but Jonathan and I dated for about eleven months before deciding we were ready to take the next steps. That may seem quick but on some level, having to work through the pornography sped our discernment up. Once we saw God’s love conquer that issue, we knew it could conquer anything else our life together could bring. Our love matured much more quickly through that trial and our discernment could have taken longer had we not experienced that setback.

Like previous posts, we will take turns telling our story.

I mentioned that around Spring Break Jonathan mentioned that he thought I should start to pray more specifically about our relationship and possible engagement. He did this because I told him early on that I don’t like things sprung on me. I would greatly dislike an out of the blue proposal and I would need some warning that it was coming. Not all the details. Just warning so I could make sure I knew what my answer would be with no hesitation.

I also happened to be visiting him in NYC when we had that conversation and while we were cleaning his apartment, I ended up finding the ring. Whoops!!!

Like Amanda said, things were pointing towards marriage. I called her dad and asked for his blessing. (I’d have asked in person, but I was 1,200 miles away.) After I got his yes, I took an inherited diamond and had it set in a new ring. After that, I hatched my plan.

Lent was coming up, so I figured I’d propose around Easter. Throughout Lent, I sent Amanda handmade postcards with a Scripture verse or saint quote on the front, and a short reflection on the back. The deal was, she’d receive the card, pray with it, and hand it over to her roommate. I told her the reason for the hand off was that the short time with the card would be a sort of analogy for our short time here on earth. In reality, it was so she’d never have multiple cards with her and figure out the larger plan.

On each card, I started the quote with a large drop capital. Not only did it make it look a little nicer, when the cards were laid out in order, the drop caps spelled “Amanda Marie Nissen will you marry me?”

It was planned that I would fly out to Champaign to visit Amanda for Easter weekend, arriving Thursday night. I booked my flight a night in advance and snuck out early to surprise Amanda the Holy Thursday morning.

I schemed with her fellow missionaries that during their usual team prayer time, they would pray somewhere else, leaving only Jesus and little ol’ me in the chapel, waiting for Amanda.

All of Lent Jonathan kept sending me these cards. I thought it was a great prayer tool and they were so neat to look at. I had to give them to my roommate Andrea because “life is passing by and I shouldn’t hold onto things.” Fine by me. I didn’t read into that or think twice.

It was April 21, 2011 and I was running late to my FOCUS team prayer time (not shocking). When I ran around the corner into the chapel, my team wasn’t there…it was just Jonathan.

I was deeply confused. He wasn’t flying in until that afternoon…

I began to mumble about my hair air-drying and where was my team at…clearly not firing on all cylinders. (See, surprises don’t work well on me!)

I was really nervous. I had never asked a girl to marry me before, especially not after a month-long build up of secret messages hidden on postcards.

Amanda walked into the small chapel, and questioned my presence. I told her I was there to pray. She took a spot at a kneeler, and I came right up beside her. I looked over at her, and burst out laughing.

I laugh when I’m nervous. Always have, probably always will. And I’ve never been more nervous than at this moment. So, naturally, I’ve never laughed more uncontrollably then that moment either. I couldn’t get it together. Finally, Amanda smiled and grabbed my face, made me look right at her, and said, “What are you trying to say? Out with it!”

I finally composed myself, said some really sweet things (which neither of us remember) and then got to the point. “I know I’ve been rambling a little bit,” I start laying down the postcards, one by one, “but what I’m trying to ask you is,” now the secret message is revealing itself, “Amanda Marie Nissen, will you marry me?”

I move in for a kiss, get two lips full of hair (it had fallen in front of her mouth), and said “I love you,” both of which were big deals, because we agreed to not kiss nor say “I love you,” unless we were engaged to be married. She said, “I love you, too,” moved her hair out of the way, and gave me a smooch.

Jonathan asked me when I thought we should get married and I told him I already knew. The night before I couldn’t fall asleep for the life of me. October 22 kept flashing in my brain and I had no idea why. I decided to Google it because maybe it was an important day. I searched and it was set to be the FIRST EVER St. John Paul II feast day!

I had a fleeting though of, “Oh it’d be nice to get married that day,” but I remembered in my diocese you need 6 months of marriage prep so I figured that date was out.

Well what do you know? Jonathan proposed 6 months and 1 day shy of that date. It also happened to be a Saturday. And my home parish was available. The date was set!

A little bit later, we entered a wedding contest (a really long story that’s too hairy to dive into here. All you need to know is that we ended up WINNING!)

Since we won the contest, marriage planning was more or less concentrated into one week that summer. This left us more time on our hands to focus on preparing for the Sacrament of Matrimony by reading books and interviewing older married couples.

We started to have more serious conversations about finances, my likely infertility issues, family traditions, past relationship mistakes, and sex.

Thankfully by waiting to kiss until engagement and even afterwards making it not a huge deal, we never struggled with being unchaste during our relationship. It was just a non-issue and we were always so busy we didn’t have opportunities to take things farther than we wanted. We also tried to use common sense…we didn’t sit around in dark rooms watching movies until 2 am. It was amazingly easy to keep chastity at the forefront with a little planning and clearly defined boundaries laid out.

The big day came. October 22, 2011. The first feast day of freshly-beatified John Paul II. We danced, we ate, we entered into a life-long sacramental bond, we rode a party bus. It was a great day.

Here we are, three years later…and two days to be exact.

The honeymoon phase wore off in time, and the day-to-day realities of dying to ourselves have set in.

We’ve known some serious highs by becoming debt-free and pursuing financial freedom. It’s been a total blessing for our marriage to be aligned and at peace financially.

We’ve known some serious lows by discovering we have infertility. We hoped to have children quickly, but that hasn’t been the case. It’s been a trial. We’ve taken our turns suffering, and we’ve taken our turns holding one another up. It’s in carrying the cross and sharing in the victories that we’ve learned how to be married, how to help one another on the journey through this life and on to the next. With that said, we are excited to be adopting our first child in two short weeks!

We’ve learned (and will continue to learn) that we can’t write our own story or control God’s will for our lives. As Mother Theresa once said, we can be “little pencils” in the hand of God and allow him to write the story through out lives. Only then are we truly living what God has prepared for us to become holy.

TL;DR – For those wanting the bullet points, here they are:

The Cross of Infertility: An Interview Part 4