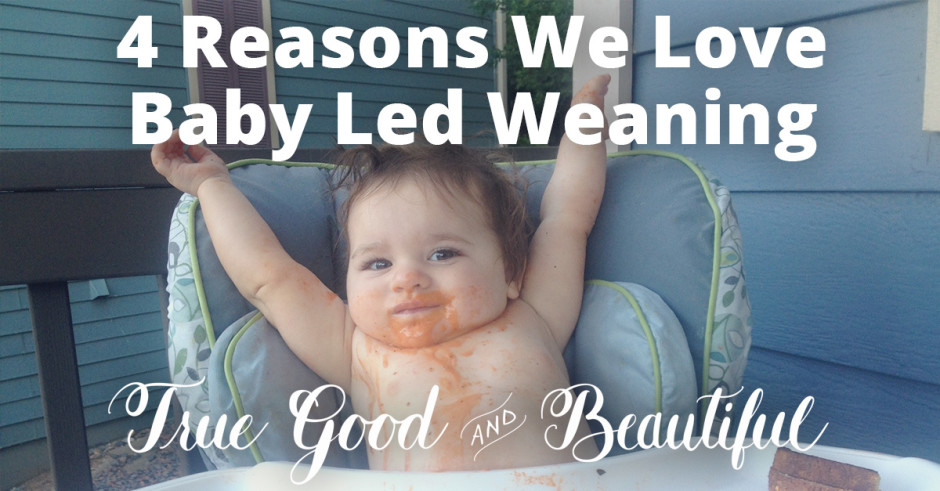 Imagine you lived long long ago, as a cave woman.

You also had a little cave baby who recently began to show an interest in food in addition to the wonderful and exclusive breastmilk you had supplied up to that point.

So what would you do?

Drive down to Target, wander down aisle three, and grab the pureed cave baby food in neatly stacked jars and pouches?

No. You did not do that.

What you did was give your baby real food. And that, my friends, is at the heart of Baby Led Weaning (BLW).

Here in this post I want to discuss what BLW is, how to know if your baby is ready for it, and 4 reasons we LOVE it for our family. 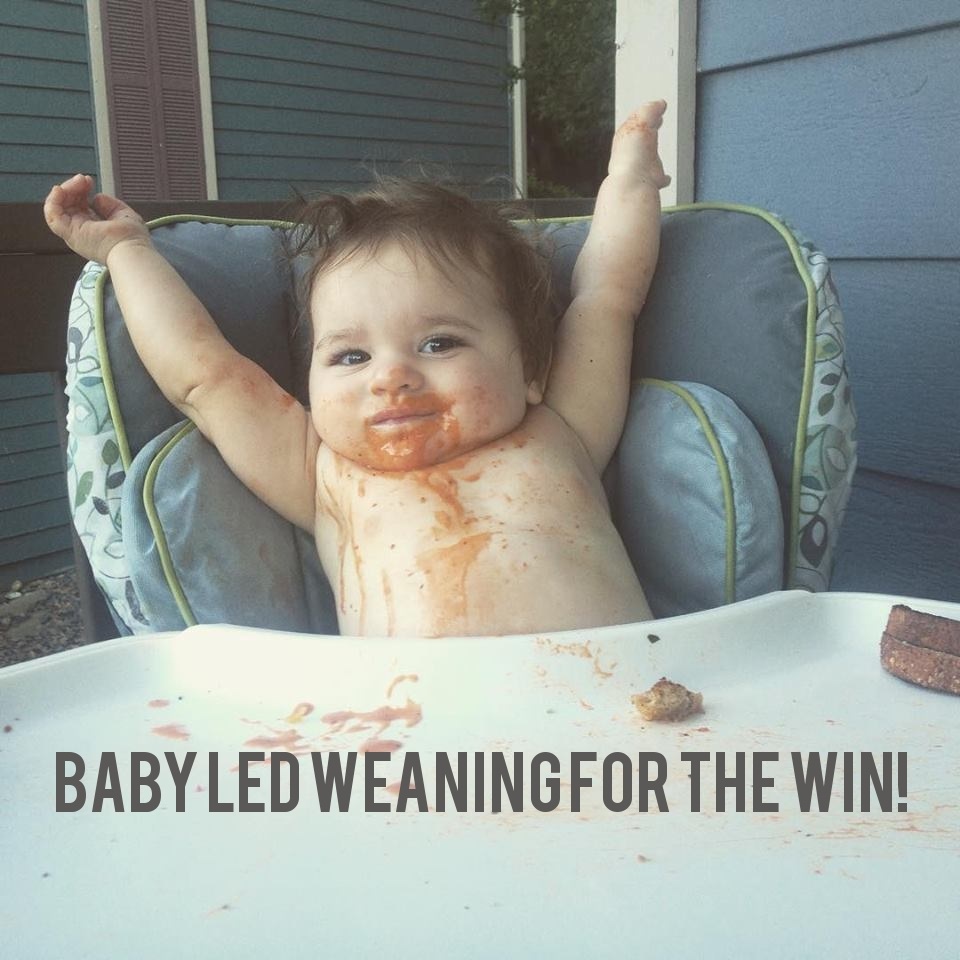 First things first, let’s clarify what we mean by “weaning” so as not to scare you prematurely.

Many people think of weaning as the end of breastfeeding (or formula if you use it), but in actuality, weaning simply refers to the beginning of the introduction of foods beyond milk. So when baby has her first taste of solid food, the weaning process has begun.The World Health Organization recommends that babies are breastfed up to two years and beyond. Josie and I are still going strong nearly 10 months into our breastfeeding journey and we have no plans to stop anytime soon despite the fact that she eats real food.

So, What Is Baby Led Weaning?

It is simply allowing the baby to eat table food on his own timetable and of his own volition. It doesn’t involve spoon-feeding pureed homemade foods into his mouth (there are exceptions like yogurt and oatmeal…at least until they learn how to use a spoon), and it doesn’t involve weirdly colored mixtures in a jar from a store. It is intentionally respectful to his personhood and his choices.

Make dinner. Serve the family. Place a bit on baby’s tray. Watch him explore and enjoy. If he likes, he will eat it. If not, he won’t. The end.

Guess what I don’t have time for?

Puree-ing my own baby food.

Meal-time battles over getting baby to eat baby food.

Finally getting to eat my (now cold) meal when baby has finished said baby food.

In BLW, the baby explores and feeds himself while you eat your own food. You simply prepare the meal you were going to eat anyway, but place some of that food on the baby’s tray and let them have at it.

Sure, this can get messy, but that is why bibs and wash clothes exist. Oh and if you want the lazy man’s clean up, try getting a dog.

2. Helps build appreciate for a wide variety of textures, shapes, colors, and tastes.

One of the reasons we chose BLW in the beginning was because we don’t want to battle a picky eater down the road. Baby Led Weaning exposes the baby to lots of diversity and texture early on, creating less pickiness in the long run.

Josie’s first meal was lox and capers. She LOVED it and we want to encourage a bold and varied palate. Ain’t nobody got time to make Mac N Cheese everyday.

BLW also allows baby to decide when he is full, helping him develop a healthy sense of satiety.

Many studies have actually found that forcing a child to finish their plate no matter what can contribute to over-eating habits later in life, from not being allowed to develop and listen to their own sense of when they’ve had enough.

3. It Keeps Us Healthy

Jonathan and I prefer to follow the raw food philosophy of eating food in its natural form as much as possible, without adulteration or factory processing.

We don’t always do it and there are times when we are tempted to eat something super unhealthy. By doing BLW, it gaurantees that at least SOMETHING at every meal will be healthful. Our goal is for the entire meal to be healthy for all but sometimes we just need to clog our arteries or send our insulin levels through the roof…but at least we serve veggies for Josie on the side now! 🙂

Babies who are allowed to practice baby-led weaning are likely to more easily develop hand-eye coordination, and be able to be self-sufficient in feeding fairly quickly.

Josie was given her first taste of food on Mother’s Day, which happened to be the date she turned 6 months old. Sure, that first attempt she grabbed food and attempted to get it into her mouth but missed and put it in her eye. But within a week or two she had the technique down. She’s an old pro at pinching/sweeping up food and getting it into her mouth. Soon enough she will be using her own spoon and fork to feed herself at mealtimes.

Babies who do BLW aslo learn how to chew BEFORE they learn how to swallow. When they are given purees it’s the opposite, which is why babies only given purees are actually more likely to choke. I know many are afraid of choking in BLW but really there is a HUGE distinction between choking and gagging.

In babies the gagging reflex is triggered very far forward on the tongue vs in adults where the gag response is triggered near the back of the tongue. So if baby takes a bite that is too large to swallow, they will gag and work it out. The chunk of food ends up being spit out and baby learns to take smaller bites in time. You should stay calm if the baby begins to gag, turn red, or get watery eyes. They will work it out. Now, if baby doesn’t make ANY sound or turns blue, then you need to perform basic first aid measures to remove the blockage.

So what are you waiting for?

Set the table (and throw some chunks on baby’s highchair tray) and let the fun begin!

What I Learned My First Year as a Mother

How to Attend Financial Peace University for FREE