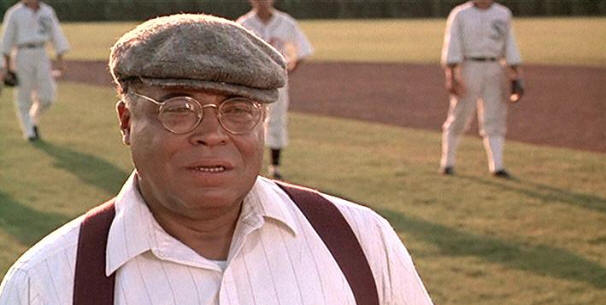 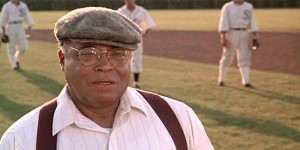 Terrance Mann’s “People Will Come” monologue. One of, if not the, best part of the movie. Although Mann is right–baseball is awesome–the monologue is so good, and stirs up a lot of emotion in a  lot of people, because the way he describes baseball addresses our internal longing for the good, the true, and the beautiful. You may think he’s speaking about baseball, but if you have “ears to hear,” he is actually speaking about the Kingdom of God.

If you haven’t seen the movie in a while (or God forbid, ever) here’s the clip. You can find a complete transcription here.

Now, let’s talk about it, bit by bit, looking for Jesus:

Ray, people will come, Ray. They’ll come to Iowa for reasons they can’t even fathom. They’ll turn up your driveway, not knowing for sure why they’re doing it.

When searching for the text of this speech, I typed “people will come” into Google. One of the results was Luke 13:29. The RSV reads: “And men will come from east and west, and from north and south, and sit at table in the kingdom of God.” Some translations even start with “People will come…” The point is simple, and the point is this: for nearly 2,000 years, people have come to Jesus. Sometimes they don’t quite know why when they start their journey home. Sometimes Jesus woos them slowly and even the most hardened atheist ends up loving Him. I know a guy who on his way to a party, walked past the Catholic Center on his campus, something deep inside of him told him to ditch his friends that night and go inside. We were hanging out when he walked in. We met, he joined my Bible study, and the next year, he joined the Church. And it all started when he “turned up the driveway, not knowing for sure why [he was] doing it.”

They’ll arrive at your door as innocent as children,

Luke 18:15-17: “Now they were bringing even infants to him that he might touch them; and when the disciples saw it, they rebuked them. But Jesus called them to him, saying, ‘Let the children come to me, and do not hinder them; for to such belongs the kingdom of God. Truly, I say to you, whoever does not receive the kingdom of God like a child shall not enter it.'” There you have it, straight from the Savior’s mouth. We must have a child-like faith. We must trust God, be able to hold up our lives to our Heavenly Father like a child a broken toy to his earthly one saying, “It’s broke,” knowing that he has the power to fix it and the love to want to fix it if we ask.

longing for the past.

I think of a scene in Matthew 19 in which Jesus is asked about divorce. The people say “You say we can’t get divorced? Moses let us divorce our wives!” And Jesus replies that “Because of your hardness of heart Moses allowed you to divorce your wives, but from the beginning it was not so.” That’s the key. From the beginning it was not so. Okay. Then what was it like in the beginning? Before the Fall, man was in right relationship with God, creation, others, and himself. It doesn’t take too long to figure out it’s not like that anymore. We disobey God, wreck the earth, cheat others, and make choices that end up biting us in the end. But it wasn’t always like this. Jesus’ sacrifice, if we accept it and Him, can repair things between us and God, and that can radiate to the other three areas. Whether we know it explicitly or not, we know we are not made to live the way we are. Things are meant to be better. And they can be. They will be. However, things won’t be back the way they were until Jesus comes again and we’re in Heaven: the New Heavens and the New Earth.

“Of course, we won’t mind if you have a look around,” you’ll say. “It’s only twenty dollars per person.” They’ll pass over the money without even thinking about it; for it is money they have and peace they lack.

The most important part here: for it is money they have and peace they lack. Despite studies that show they money really can’t buy happiness, we keep falling prey to wanting more stuff. And we can’t get they stuff unless we get more money. We never hear something saying “You know, once I got that million dollars, life got a lot sunnier. I had so much more meaning in my life.” We don’t hear it because it doesn’t happen. Too often we hear of people who have every thing they could want, all the money they could want, and they are desperately lonely. Terribly peaceless. Some of the most peaceful, joyful people I know are monks, brothers, and nuns who have given up everything, who personally own nothing. If we put our worth in something as insignificant as money, it only makes sense that we’ll eventually end up feeling worthless. We must ask ourselves: is it money I have and peace I lack?

And they’ll walk out to the bleachers, and sit in shirt-sleeves on a perfect afternoon. They’ll find they have reserved seats somewhere along one of the baselines, where they sat when they were children and cheered their heroes.

When we enter into the Kingdom of God, it will be on a perfect afternoon. The image of sitting where they say when they were children and cheered their heroes does something for me. Perhaps because I can remember however sentimentally, being a child, cheering for Ryne Sandberg, my hero. I guess I just love the image. Grown men and women taken back decades to when the world was–in their eyes–a better, nicer, simpler place. Whenever I hang out with kids I’m impressed by their energy, their ability to put their whole selves into something, to lose themselves in obstacle course races or pretending someone’s a zombie. Perhaps that’s the part of childlike faith we need to recapture: the ability, the willingness to give ourselves totally to something, except it won’t be something, it will be someone, God, and instead of playing around with imagination, we will worship in total holy reality.

And they’ll watch the game, and it’ll be as if they’d dipped themselves in magic waters.

“Dipped themselves in magic waters,” like Baptism, except Baptism isn’t magic. It’s a sacrament. The Catechism of the Catholic Church puts it this way: “This sacrament is called Baptism, after the central rite by which it is carried out: to baptize (Greek baptizein) means to “plunge” or “immerse”; the “plunge” into the water symbolizes the catechumen’s burial into Christ’s death, from which he rises up by resurrection with him, as “a new creature.” Apart from grace, how other than magic could such a thing be claimed possible? We enter into the life of grace, we give ourselves to Jesus, we get baptised, and we dip ourselves in grace-filled waters.

The memories will be so thick, they’ll have to brush them away from their faces.

Two of the last three excerpts of the speech are reiterations of two important ideas: child-like faith and the past. The memories, the realization of how it was “in the beginning,” will be so thick, we’ll have to brush it away from our faces. That’s how much love God has for us. The very air will be saturated with divine love. This is not wishful thinking, this is the reality of God. This love can be ours if we but accept it.

The one constant through all the years, Ray, has been baseball. America has rolled by like an army of steamrollers. It’s been erased like a blackboard, rebuilt, and erased again. But baseball has marked the time.

Mann is right. He might as well say, “The things of this world pass away, again and again. Faith is strong. God is constant.” But he didn’t. But, he didn’t have to, John already did. 1 John 2:17 says: “And the world passes away, and the lust of it; but he who does the will of God abides for ever.” We can chase the things of this world, but they will never satisfy our deepest longings. Only Jesus can. Everything in this life changes, our relationships change: son, brother, husband, father, friend; our bodies change and eventually give out; jobs are lost; cars crash; loved ones die. The whole time, Jesus is with us, his love never-changing, only our receptiveness of it wavers, hopefully it grows.

This field, this game, is a part of our past, Ray. It reminds us of all that once was good, and it could be again. Ohhhhhhhh, people will come, Ray. People will most definitely come.

I hear him say: “This faith, this Church, is a part of our lives, Jonathan. It reminds us of all that once was good, and it could be again.” I think of Eden and my heart aches for what we have lost. I think of Jesus’ love and the promise of Heaven, and my hope is restored. We hear so often in our culture today that we modern men and women have learned so much, that we can move beyond the so-called restraints of religious thinking, the shackles of faith. Some may be tempted to think that God is dead and the Church is dying. Please. Jesus lives, and the Church is full of young Catholics who love Jesus and give their lives to him.

I also want to address the comments made by Mark, Ray’s Brother in Law, interruptions peppered throughout the “People Will Come” monologue.

Ray, when the bank opens in the morning, they’ll foreclose.

You’re broke, Ray. You sell now or you lose everything.

Ray, you will lose everything. You will be evicted…C’mon, Ray.

And once Ray decides not to sell:

Mark is like the devil. He’s chirping in our ear that the Truth we experience is not real, that God will not keep his promises, that his way is the only viable option, that God does not, cannot, and will not work miracles. Sometimes that voice comes straight from the enemy. I think most times it comes from our culture or from ourselves. We must do all we can to not listen to him. God loves. God wins. God takes care of his children. Every time. 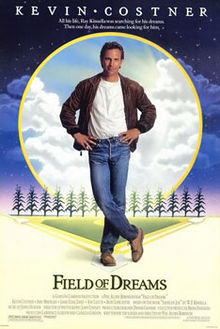 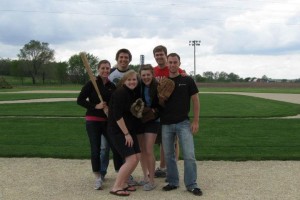 A few weeks ago, we visited the Field of Dreams in Dyersville, Iowa. While I didn’t confuse it with Heaven, it was pretty great.

In preparation for our visit, we watched the movie, one of my favorites. While we were watching, I was struck with a number of great ideas for posts. 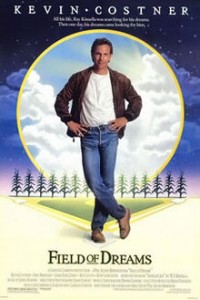 Starting tomorrow, I’ll be publishing a series of posts on the great things we can learn from the field of dreams.